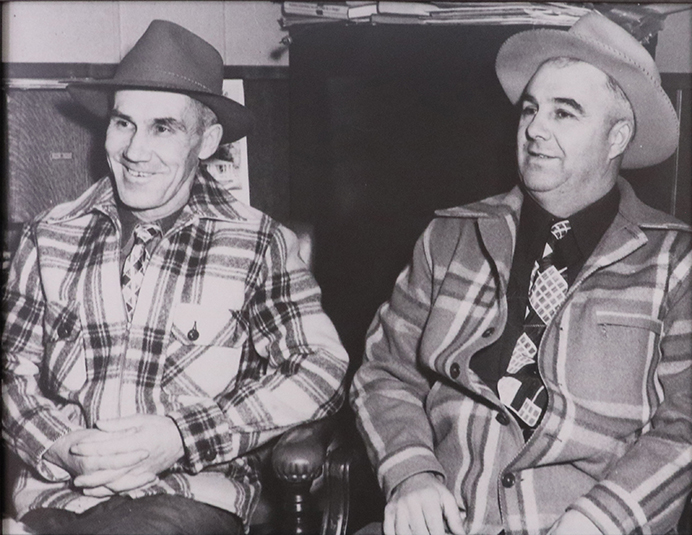 William was born in 1899 and Otto in 1901 to Carl and Dina Brakebush, immigrants from Germany. Like many Wisconsin children at that time, they both left school after the seventh grade to help the rest of the family on the farm. After their father died suddenly in 1919, when the boys were 18 & 19 years old, they needed to do more than farming to support the family and remembered the lessons learned from their father – put your faith in God, work hard, and keep your eyes open for new opportunities. Six years later, in 1925, William and Otto bought a truck and started their family business. With it, Brakebush Brothers performed a valuable service by taking local livestock and poultry from Westfield, WI to major markets in Madison and Milwaukee.

As their business grew, they also bought eggs from local grocers and sold them in places where greater demand existed. But these weren’t just any eggs. The brothers were committed to providing the best quality eggs to their customers, so they built a new building in 1930 to inspect and grade every single egg. Candling eggs involved holding each egg up to a light, and inspecting the inside to make sure it was of the highest quality. The eggs were weighed, separated by size and placed in small, medium, large, and extra-large cartons by hand.

After delivering their eggs, William and Otto had been returning home with an empty truck. Home canning was popular at the time, and everyone needed sugar, so they decided to back-haul sugar from Madison and Milwaukee and sold it to stores back home. Eventually, they turned an old feed mill building into a sugar warehouse for storage.

In a logical extension of business, Brakebush Brothers began picking up live poultry, dressing and freezing it as a service to their customers. Service and reliability were key factors in the growth of the business. A dressing and freezing facility was built in 1941, and this started the modern Brakebush Brothers, Inc. in the food industry. Working with dressed poultry required a sophisticated freezing system. By 1942, new freezers were added and the first ice-packed poultry was sold from the Brakebush property. Soon whole birds, cut up birds and individual parts were being trucked to grocery stores, meat markets and restaurants.

The plant was expanding, and there were more trucks now, but family, faith, community, and quality continued to be the values that mattered. Everybody helped out in the plant, even little kids. Otto’s son, Carl, remembers weighing chickens- three pounds, four pounds, five pounds- packing them into different-sized boxes as they came off the line, and trucking them to the cooler before they were delivered to customers. When the Brakebush kids were teenagers, they spent their summers working on the line, helping with construction, learning about the trucks, and watching their fathers and the other employees who were running the growing company.

After high school, William’s son Billy completed college at UW- Madison and then went to work at an accounting firm. He and his wife, Nancy, returned home and began working for the family business in 1962. Meanwhile, Otto’s son, Carl, was studying at UW- Madison and serving in the Air National Guard. After graduation in 1968, he took a job at the Wilson Meat packing Plant in Albert Lea, Minnesota. A year later he decided it was time to return to his family’s company, and shortly after, in 1970, he and Judy were married.

In the late 1960s, Bill Sr., Carl, and Billy were struggling with a changing market. Highways had improved and suppliers in southern states were able to ship partially frozen chickens in freezer trucks to distributors in the north. The company needed a change and Nancy had been experimenting with a cooked breaded chicken process. From that point on, they devoted most of their time and energy to creating and selling cooked chicken products.

Otto continued his work for the company until his death in 1967. William had no plans to retire, continuing to run the company until his death in 1982. From the beginning as a one-room egg candling business, the company has evolved into state-of-the-art poultry processing plants in Westfield, Wisconsin and Wells, Minnesota as well as a portioning plant in Irving, Texas. Today, Brakebush employs nearly 2000 people company-wide with approximately 1100 located in Westfield.

But many things haven’t changed at all. The company still strives to maintain the Brakebush brothers’ values: faith, family, loyalty to employees and community, pride in doing the best job possible, quality of the product, dedication to customers, and commitment to keep the company going for future generations.