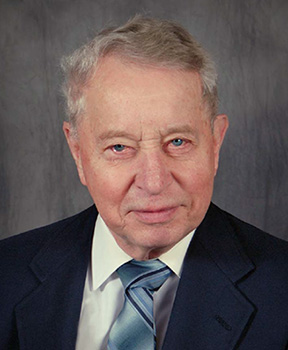 William E. Kramlich obtained his B.S. and M.S. degrees in Animal Science and Meat Science respectively, from Pennsylvania State University. He next enrolled at Michigan State University where he was awarded the Ph.D. degree in Meat Science in 1959. Two scientific papers resulted from his thesis which clearly demonstrated that the chemical components responsible for meat flavor were located in the water-soluble fraction of meat and that heat must be applied in order to convert the flavor of raw meat to the full, rich savory flavor of cooked meat. His research represented the first attempt to isolate and identify the volatile chemical compounds in cooked meat by the use of gas liquid chromatography.

After finishing the Ph.D. degree at MSU in 1959, Bill Kramlich accepted the position of Meat Scientist in the Food and Packaging Laboratory of Union Carbide Corporation, now Viskase. In 1962 he was appointed Group Supervisor and was named Manager of Food Technology and Technical Services in the Food Science Institute of Union Carbide in 1966. Dr. Kramlich not only traveled widely to assist customers with solving problems encountered in processing of sausages and other meat products, but also carried on an active research program at the Food Science Institute for development of better products.

In 1973, Dr. Kramlich became General Plant Superintendent of Hillshire Farm Company, New London, Wisconsin, later a division of Sara Lee Corporation and now part of Hillshire Brands. He was appointed Vice President of Operations in 1974. In 1985 he was named President, of Hillshire Farms, a position he held until 1988 when he retired and was appointed technical consultant to the meat group of Sara Lee Corporation. While at Hillshire Farms, Bill Kramlich was the recipient of three Sara Lee Record of Performance Awards and two President’s Awards, which were based on outstanding performance in meeting established financial goals. Under Dr. Kramlich’s leadership, Hillshire Farms grew from a small locally known company to a major national processor with coast-to-coast distribution. He developed the “clean room” concept, in which microbial contamination was reduced by using a semi-sterile room, protective clothing, face masks and disposable gloves to extend product shelf life. The “clean room” concept was instrumental in the development and commercialization of thin sliced, whole muscle meat products that are currently being successfully marketed by several major companies.

In 1989, Dr. Kramlich and his wife, Dorothy, purchased the meat division of R-Line Foods, Inc. in Ripon, Wisconsin and founded Silver Creek Specialty Meats. The family business is now located in Oshkosh, Wisconsin where their sons, Bill and Tom, continue the tradition of specializing in producing high quality traditional products. Their unique flavors are derived from quality ingredients, special seasoning recipes, and a natural smoking process. Jim’s, Blue Ribbon, Summer Sausage, one of the products they produce, still remains as one of the best known Wisconsin style summer sausages in the nation.

Dr. Kramlich was also the senior author of the first edition of the well-known book “Processed Meats”. This book has been widely used as a text in meat processing courses at colleges and universities throughout the world. He also wrote a chapter in the book “The Science of Meat and Meat Products.” entitled “Sausages”.

Dr. Kramlich has spent his entire professional career strengthening the processed meat industry through technical innovation and communication. He has lived most of his life in Wisconsin and continues to contribute to the processed meat industry of the state. Few others have so successfully blended their scientific training and principles with management and marketing as Dr. Kramlich. This makes him extremely worthy of membership in the Wisconsin Meat Industry Hall of Fame.