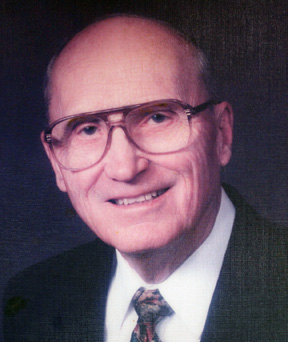 Wallace Jerome used his early interest, as a teenager, in hatching turkey eggs to launch the
business enterprise of Jerome Foods which today processes over 75% of the turkeys raised in
Wisconsin and is among the top ten turkey processors in the United States.

Marion passed away in 1987. In 1990, Wallace married Ethel Voigt.
By the time Mr. Jerome finished high school in 1928, he had 200 turkeys, and he was able to
maintain and grow his business while pursuing further education. His strategy was to be
involved in every aspect of the business: from the egg, hatchery, growing, feed, processing, and
through to marketing. By being so independent, he was able to survive those hard depression
years. In the late 1940s, he purchased an old abandoned pea cannery which would later become
the location of Jerome Foods. He visited a plant in Omaha, Nebraska before developing and
designing his state-of-the-art, oven-ready processing plant. He was always willing to learn and
see how others were doing things and taking two or three ideas and applying them to his
business. Prior to this time, turkeys were sold as New York dressed, only defeathered and bled.
Over the years, Jerome Foods grew toward further processing and creating turkey as an everyday
staple rather than a holiday food.

His innovative spirit and fascination with further processing resulted in the production of items
such as turkey steak, tenderloins, ground turkey, turkey ham, many sausages such as Italian
links, and specialty items such as GobbleStix™. Most of these items are marketed nationally
under THE TURKEY STORE® trademark.

From the humble beginning of attempting to hatch a few eggs, Jerome Foods now employs over
2,500 people. There are processing plants in Barron, Wisconsin and Altura and Faribault,
Minnesota which process in excess of 45,000 birds per day. His company also has hatcheries,
growing facilities, and feed mills in Wisconsin and Minnesota.

The accomplishments were not made alone, and he gives due credit to help from his parents,
sister Amy, twin brother Willis, and beloved wife Marion. The TEAM spirit still drives the
business today with the motto being, “Together, Everyone Achieves More.”

Wallace Jerome has been an active member of the National Turkey Federation, Wisconsin
Turkey Federation (Director and Past President), Southeastern Poultry and Egg Association,
Midwest Poultry Federation, World Poultry Science Association, and the Wisconsin Agri-
Business Council. In the late 1970s, he was appointed to the Wisconsin State Board of
Agriculture. He has received the Honorary Recognition Award of the College of Agricultural
and Life Sciences at the University of Wisconsin, was recognized as Wisconsin Manufacturing
and Commerce’s Man of the Year, received the Distinguished Service Award of the Wisconsin
Farm Bureau, and was elected to the American Poultry Hall of Fame in 1992. In 1988 he was
named “Man of the Year” by Alpha Gamma Rho.

Wallace Jerome developed a nationally recognized organization in the turkey business based on
the idea of conception to consumption. It has greatly stimulated turkey production and
processing not only in Wisconsin but across the United States, leading to more than 2,500 jobs.
His leadership in adopting innovative technology has shifted the emphasis on turkey from being
primarily a holiday meat to a broad range of unique and convenient products which have become
a major part of the American diet. He certainly qualifies for the name of “Mr. Turkey” in
Wisconsin.