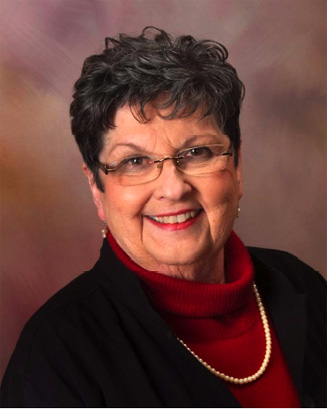 The “BEEF LADY,” as Virginia Hazlett is affectionately known at the Wisconsin Beef Council and to many TV viewers in the Milwaukee and Green Bay area, could also be crowned as “The Meat Lady of Wisconsin”. Virginia has worked diligently for over 30 years promoting not only beef, but also pork, veal, lamb and Wisconsin’s specialty meats.

Virginia was born on a Kenosha county dairy farm to Alvin and Evelyn Streuli. After graduating from high school, she went on to study Home Economics at the University of Wisconsin-Madison. Her first job was editor of the Women’s pages for the Racine Journal Times. She soon found writing was not as fulfilling as teaching. Virginia moved on to becoming a homeeconomics teacher for 15 years at Racine Lutheran High School.

She has always believed that educating the consumer, especially our youth, is key to maintaining and building demand for our products. She discovered first hand in the 80s and 90s that people no longer learned to cook from their parents. Someone needed to get the industry to recognize the need for teaching the consumer how to prepare meat products. After leaving the high school home economics field, Virginia went to work as a consultant on educational projects for the Southeastern Wisconsin Pork Producers in 1981. She has remained in Wisconsin’s meat industry, consulting and educating, since that time.

Virginia has a great spirit and sense of adventure, never standing still and always wanting to learn. She is very comfortabletalking and working with all types of people – surly retail meat managers, sassy media personalities and timid consumers. This is one of her best attributes and why she is so successful in what she does.

Some of the highlights of Virginia’s consulting career include helping with the development of The Wisconsin Pork Association’s first “Taste of Elegance”. She also brought together beef and pork producers with the American Heart Association to change the negative perception of red meat. She implemented “Nutri-Facts” and secured placement of “Meat Features” (60 second cooking videos featuring beef, pork, lamb, veal and sausage, into Wisconsin’s supermarkets in the mid 1980’s). Virginia was the first television on-air personality for the Wisconsin Beef Council. She was a trend setter helping the Wisconsin Beef Council to establish a relationship with TV stations across the state, educating consumers about beef and veal. Virginia was instrumental in the development and operation of the Wisconsin Livestock and Meat Council exhibit at the Wisconsin State Fair in 1990. The 50-foot exhibit, housing beef, veal, lamb and pork promotional elements, was created and present at every Wisconsin State Fair for 11 years. Virginia managed this exhibit and could be seen in that exhibit almost every day of every fair!!

Virginia was given the Honorary Recognition Award by the College of Agriculture and Life Sciences at the University of Wisconsin – Madison in 1995.

The Wisconsin meat industry has flourished because of many innovative and hardworking people. There are many different aspects to a successful industry; however, they cannot be successful without good promotion and education about its many varied products. This is where Virginia has excelled and made her impact with Wisconsin’s meat industry reaping the benefits.