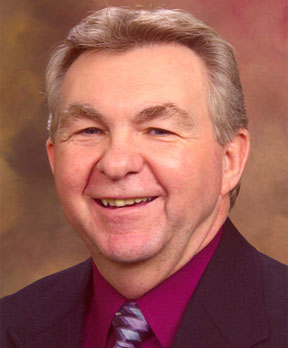 Terry L. Burkhardt was born in Monroe, Wisconsin in 1950 and grew up in the Mt. Vernon area. As a youth
he participated in 4-H. Terry graduated from Mt. Horeb High School in 1968. Soon thereafter he was drafted
into the military (1970) and chose to serve as a Food Safety Inspector during his tour of duty in Korea. He
received his public health training at the Brooke Army Medical Center in San Antonio, Texas. Terry began
his career in Meat Inspection in 1973 as an inspector. He also worked as a meat safety consultant and
label specialist, and in 1991, was appointed the Director of the Wisconsin Meat Inspection Program. Terry
retired in January of 2007. He and his wife, Marcia, have two sons, Timothy and Bradley. He and his family
live in Madison, Wisconsin.

Terry’s most noteworthy accomplishments include leading the State Meat Inspection program throughout
the implementation of the Pathogen Reduction/ HACCP regulation. He was an enthusiastic supporter of
the Wisconsin meat industry and steadfast in his belief that, with some collegial guidance from the Meat
Safety and Inspection program and UW Extension, operators of Wisconsin meat businesses could and
would implement business-specific, risk-based meat safety systems — and he was right. Under his
leadership, the inspection program evolved from a “command and control” approach to one that verifies
industry practices through the use of science-based prevention strategies (HACCP) to meet specific
microbiological performance standards.

During Terry’s tenure, Wisconsin gained national recognition for its helpful approach to achieve industry
compliance with HACCP regulations. This approach included cooperation with UW Extension to conduct
joint training sessions that provided the opportunity for industry and inspectors to learn the requirements
and also improve communications between industry and inspection. While the number of state inspected
facilities dropped considerably in many states because of the Pathogen Reduction/HACCP regulation, the
number remained constant in Wisconsin. This is directly related to the “helpful” approach he so strongly
supported during the implementation of these regulations.

He believed in the value of the Wisconsin meat industry and the wonderful, often unique, products these
businesses produced. And he believed that the Wisconsin Meat Safety and Inspection program could add
value for these businesses and simultaneously achieve the meat safety and inspection program’s public
health mission. As President of the National Association of State Meat and Food Inspection Directors, he
provided testimony at Congressional hearings relating to issues impacting small meat establishments.
Terry also served on the USDA’s National Advisory Council on Meat and Poultry Inspection for four years
where he represented the interests of small meat establishments and state meat inspection programs.
Terry was a strong proponent for removing barriers to interstate sales of meat from state inspected
businesses.

Terry was a great manager of people and a problem solver. According to Steve Steinhoff (Administrator,
Division of Food Safety, Wis. Dept. of Agriculture, Trade and Consumer Protection) if Terry wasn’t the best
manager of a state meat inspection program in the country at the time, he would be surprised — and it
would take a lot to convince him otherwise. Terry was equally at ease with legislators, consumer
advocates, and USDA managers as with Wisconsin’s inspection staff and the hundreds of Wisconsin
meat business operators who he viewed as the bureau’s most immediate customers.

Terry’s hobbies include racquetball and golf. He is an active member of the Door Creek Church. During his
retirement he has twice traveled to New Orleans to help families recover from Hurricane Katrina.

Terry was a well-respected leader in both the State Inspection program and the meat industry in
Wisconsin. His significant, lasting, positive impact on the meat industry merits induction into the
Wisconsin Meat Industry Hall of Fame.