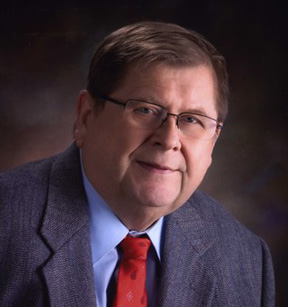 Russ Wenzel, President of Harry C. Wenzel & Sons, Inc., Marshfield, WI, was born to Harry and Violet Wenzel on September 19, 1948.  Russ comes from a long line of sausage makers.  His great grandfather brought the craft from Germany to Wisconsin more than 100 years ago.  Russ was less than a year old when the sausage manufacturing company he now heads was formed by his grandfather, father and uncle.

The sausage plant was his favorite playground as he was growing up.  On weekends, he would accompany his father to the plant, where he learned how to fix almost any machine that needed fixing.  A new delivery truck meant it was time for the whole family to take a ride to try it out.  Sausage-making was his first love and his first job.  He got his start skinning hot dogs and packaging fresh bratwurst during the summers in high school, but at one time or another he has done virtually every job at the company.

He also found ways to integrate the sausage plant with other aspects of his life.  As business manager for the high school student newspaper, he helped get the newspaper off the ground and kept it solvent by organizing foot-long hot dog sales after school.

The only time he was not working at the sausage plant was during two years of military service, but even then he found time to check out the sausage competition in Germany from 1969-71.  Following his service, he returned to join the family business.  There he staked out new sales routes, extend the company’s sales into new markets around the state and helped to expand the company’s product line.

The company has grown under Russ’ leadership and is celebrating its 61st year of operation in 2010.  Today, the company manufactures more than 30 products under its own name and also manufactures custom sausage for many other brand names throughout the country. While hot dogs are still one of the top three products, beef sticks are number one and can be found at convenience stores and other markets around the Midwest.  Other major products are summer sausage and thuringer, braunschweiger, and bratwurst.

Throughout his career, Russ has found time to be actively involved in the community and the industry.  His two-year experience on the high school stage crew led to 35 years of work with the University of Wisconsin-Marshfield Campus Community Theater.  He also served on the University’s foundation board for 3 years.  He was active in the Jaycees for many years and held many offices including serving as President in 1977.  He is a long-time member of the Chamber of Commerce’s Ambassador Club and served as President from 1991-1992 and again in 2000.  He is an active member of the local Rotary Club.

He served as a director of the Central Wisconsin State Fair Board for many years, including a term as Vice President and another as Treasurer.  He is currently Vice President of the Marshfield Utilities Commission and has been on the board for 7 years, three of those as President.  He served 3 years on the Marshfield Visitor and Promotion Committee as well.  For his outstanding service to the community, Russ received the Chamber of Commerce’s Service Award in 2007.

For his contributions to the meat industry, his fellow meat processors and to the community, we are proud to induct Russ Wenzel into the Wisconsin Meat Industry Hall of Fame.