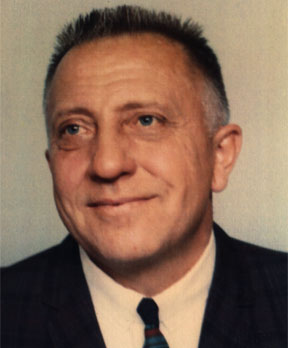 Russell Mass was born in Cicero, Illinois on September 23, 1918. He graduated from the University of
Illinois with a Bachelors Degree in Food Science. Following military service and jobs in the chemical
industry, he took employment with Oscar Mayer & Co. in Madison, Wisconsin in 1952. There he spent the
rest of his professional career in the Research and Development Department.

Most notable of Russ’ accomplishments was the discovery, development and patenting of the “tumbling”
process. In this process, large pieces of meat are physically massaged in the presence of salt so that
muscle protein is extracted to create a “glue” which causes the pieces to adhere to each other when they
are further processed. This invention is now used world-wide to produce boneless meat products such as
ham, Canadian bacon and deli-style turkey breasts. Prior to the early 1960’s, when Russ’ “Sectioning and
Forming” technique was implemented, the options for processing large meat pieces were constrained by
the natural form of the meat. For example, if cured boneless pork loins were too small to make a
convenient size of Canadian bacon the processor sewed two loins together, but upon slicing the pieces
most often came apart. By “tumbling” the cured loins in a mixer or churn, Maas discovered that they could
be firmly “glued” to each other when processed in a removable fibrous casing.

Another example is, prior to 1960, processors had to rely on the natural seams in hams for the finished
cooked product to hold together. The majority of the hams produced then were traditional bone-in hams. If
a boneless product was desired the femur and other bones were removed and the boneless ham was
pressed either in a pear shaped can or in a metal form. The Maas procedure allowed the processor to
remove and trim the ham muscles and after curing and tumbling, form them into any shape they desired.
This provided the world with square, large muscle sliced ham or the myriad of forms seen in the market
today.

The Maas “Sectioning and Forming” patent allowed not just Oscar Mayer, but the world’s processed meat
industry to become more creative in the use of meat in a way that provided the consumer all of the
advantages of natural, whole muscle products without the disadvantages associated with bone, fat and
connective tissue.

Additionally, while working in the Research Department of Oscar Mayer, Mass published over 200 meat
processing related research reports and received four patents. He did pioneering research in technologies
that have become common in today’s meat industry, such as developing an operating system for
centrifugally removing fat from chopped meat. Even before the widespread commercial use of poultry as a
raw material in processed meat products, Russ Mass had produced poultry wieners and cold cuts.

On behalf of Oscar Mayer, Russ worked with scientists at the U.S. Army Food Research Laboratory at
Natick, Massachusetts, to produce shelf-stable meals for the U.S. armed forces. Some of this research
included pioneering efforts in food irradiation. Little known was the support that Russ provided medical
researchers around the nation by supplying high quality animal tissues, such as porcine hypothalamus,
for their research programs. He created detailed written procedures for the removal of each tissue to aid
the technicians doing the work as well as to assure the scientists that the best practices were being
followed. Russ was proud of the fact that Andrew Shally and Rosalyn Yalow were winners of the 1977
Nobel Prize in Physiology and Medicine. He was instrumental in encouraging Oscar Mayer to donate the
hypothalamic that were necessary for their work

Russell Maas met his future wife, Shirley Essenberg, while he was with the U.S. Army during World War II.
They were married October 9, 1943 in Gadston, Alabama. Their daughter, Suzann Maas, is extremely
proud of her father’s accomplishments. Russ was a Professional Member of the Institute of Food
Technologist and was very active in the Wisconsin Section of that Association. He died August 24, 1980
while still working at Oscar Mayer.

Russ set an example for young meat researchers working around him by his visible work ethic and
attention to scientific detail. He was known for carefully preparing a written experimental design and a
comprehensive, legally acceptable, written record of each experiment he performed. He loved his job and
worked hard for his company and the meat industry. It is for these efforts that we are pleased to recognize
Mr. Russell H. Maas as a member of the Wisconsin Meat Industry Hall of Fame.