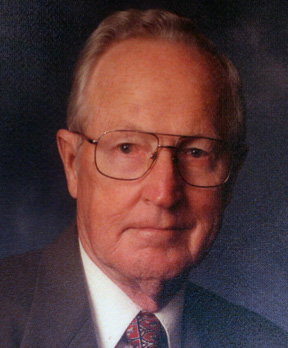 “Bob” Thayer, the son of William and Rebecca Thayer, was born and raised on a farm near
Whitewater, Wisconsin. He married Barbara Wright and they are the parents of Sandra (wife of
Larry Stover), Donald (and wife Jamie), Sally (wife of Scott Plummer) and Rebecca (wife of
Phillip Mohs), and the grandparents to 11 grandchildren. All four of the children are graduates
of the University of Wisconsin and now several of the grand children are attending UW-Madison.
There is little doubt that Bob is certainly “Something Special from Wisconsin.” Thayer’s interest
in the livestock industry began in his youth with 4-H and FFA livestock projects. He taught high
school vocational agriculture from 1946 to 1953, first in Johnson Creek and then in Whitewater.
His teaching record and excellent meat animal production programs caught the attention of
Wisconsin Department of Agriculture administrators, and he was named livestock marketing
specialist in 1953. He was promoted to head of the marketing section in 1957, and in 1964 was
appointed administrator of the marketing division, a position he held until his retirement from
the Department of Agriculture, Trade and Consumer Protection (DATCP) in 1985.
Thayer initiated the marketing logo “Something Special from Wisconsin” in 1983. While at
DATCP, he served as secretary of the Wisconsin Livestock Breeders Association and
coordinated the four Junior Livestock Shows for 10 years. During his leadership, the shows
were expanded to include the market grading of each animal, carcass evaluation contests, and
retail meat cut identification exhibits and contests.

He helped to develop an international agri-trade program for state departments of agriculture,
and served on the steering committee for the development of the Mid-America International
Agri-Trade Council. He also served on the Wisconsin Export Council, and as close liaison on
international trade projects with the USDA’s Foreign Agricultural Service.

Many of Thayer’s contributions to Wisconsin’s livestock industry went far beyond his job
description. He managed several statewide livestock shows, and coordinated the Meat Animal
Sale at the Wisconsin State Fair. He also coordinated tours for foreign visitors interested in
buying Wisconsin agricultural products, and he held livestock seminars and set up hospitality
seminars for international visitors at the World Dairy Exposition. Thayer spearheaded the
organization of the World Food and Agricultural Foundation, Inc., which developed World Dairy
Exposition.

Thayer joined Bob Bray, Ed Jones (both recipients of the Hall of Fame recognition in 1994 and
1997) and others to organize the Wisconsin Livestock and Meat Council. For many years, Bob
served as the council’s advisor and representative from the DATCP. Through his leadership, the
council has provided focus and direction for coordinating numerous activities (such as the Hall
of Fame), and continues at present to play a successful role in Wisconsin’s animal agriculture
progress.

Of special note in recognizing Robert Thayer for the 1999 Hall of Fame award is that he is the
first person serving government to be so honored.