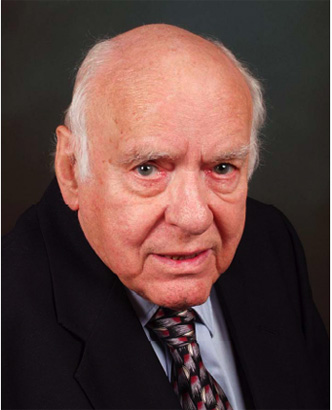 Bob was born in Chicago in 1924. His formal education was delayed when he was drafted to serve in WWII. Bob served in the 82nd Airborne Division and in December of 1944 he was wounded and captured in the Battle of the Bulge. During the continuing chaos of the battle, Bob escaped back to the allied lines.

After the war, Bob received a B.S., M.S and a Ph.D. from the University of Chicago. In 1962, Bob began his career in microbiology at the American Meat Institute Foundation where he developed the first commercial starter culture for the production of fermented sausage.

In 1964 Bob took a position at Cornell University as an Associate Professor of Bacteriology where he isolated, characterized and named a new enterococcus species, Streptococcus avian.

In 1966, Bob moved to the University of Wisconsin with a cross appointment in the Food Research Institute (FRI). He became full Professor in 1970 and also served as chairman of the Bacteriology Department for 3 years. Bob also mentored numerous graduate students in their pursuit of advanced degrees.

While at the UW, Bob made significant contributions to the safety of meat products. In the early1970s, he conducted a study sponsored by the AMI, USDA and FDA to determine the effect ofsodium nitrite both alone and in combination with sodium ascorbate, on the growth of and toxin formation by Clostridium botulinum in inoculated, temperature-abused hot dogs. The results of this study confirmed that sodium nitrite was effective in preventing the growth of this pathogen in temperature-abused hot dogs. This information was used by the USDA to defend the continued use of sodium nitrite in cured meat products. He also conducted important research into the problems with Staphylococcus aureus in fermented sausages.

In 1979, Bob founded a commercial laboratory for microbiologically testing of foods, water, and cosmetics. Deibel Labs currently operates in 10 locations in the US and one in Canada. In the 1980s when Listeria was shown to be a potential problem to the food industry, Deibel Labs was one of the first commercial labs to develop procedures for testing plant environment samples for this pathogen. They also test for other pathogens as well as conduct product and process validation studies. Currently Deibel Labs is one of the few remaining commercial labs that are qualified to conduct inoculated pack studies with C. botulinum. In the 1990s, Deibel Labs verified that the presence of sodium lactate in uncured poultry products would delay the growth of and toxin production by C. botulinum.

Deibel Labs also has a unique lab in Florida called Toxin Technology. This facility specializes in the production of microbial and plant toxins that are used in research studies. In the 1980s, Toxin Technology produced Listeria antisera for both the FDA and USDA.

Bob has either authored or co-authored 87 peer reviewed research papers. He also published a chapter in the book Laboratory Analysis of Milk and Dairy Products. Bob has received numerous awards throughout his 58-year career because of his contributions in food microbiology. In 1960, the Institute of Food Technology presented Bob with their Achievement Award, in 1968 he received the University of Wisconsin Jung Excellence in Teaching Award and in 1990, the Wisconsin Laboratory Association recognized Bob as being the Laboratorian of the Year. In 2008, the AMI also recognized Bob for his many contributions to the meat and poultry industries. In 2009, the International Association of Food Protection presented Bob with their prestigious Barnum Award. And in 2010, the Food Research Institute at the University of Wisconsin asked Bob to present the yearly Frazier Lectureship in Food Microbiology.

Bob has been married to his wife, Carol, for 50 years. He has 5 children, 7 grandchildren and 8 great grandchildren. At the age of 87, Dr. Deibel continues to meet the ongoing microbiological challenges in the food industry.