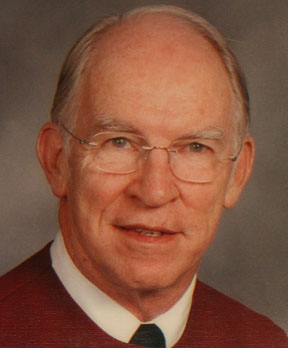 During Bob Kauffman’s 30-year tenure as the Atwood Professor of Animal Science at the University of
Wisconsin-Madison, he influenced the career paths of many students and instituted several innovative
pedagogical methods of testing and coordinating learning for students. He also contributed to the pork
industry by helping define a fourth lean quality type and patenting a method of improving color, water-
holding capacity and tenderness in pork, beef, poultry and lamb muscles.

Kauffman is a native of Princeton, Mo. and is currently managing the family farm there. He obtained a
bachelor’s degree in animal husbandry from Iowa State University, and master’s (Animal Science-
Agricultural Economics) and doctorate degrees (Animals Science- Biochemistry) from the University of
Wisconsin-Madison. Kauffman served in the United States Air Force, and then began his academic career
in animal science, first at the University of Illinois-Urbana and then at the UW-Madison. He was a visiting
scientist at the Research Institute of Animal Production, Zeist, The Netherlands in 1985. In 1995, after 30
years of teaching and conducting research, Kauffman retired from the animal sciences department at UW-
Madison. He currently holds the status of Emeritus Professor in that department.

During his 35-year academic career, Kauffman had a profound effect on his students, the meat science
faculty at UW-Madison, and on business people in the state, national and international meat industry. His
enthusiastic personality and creative mind led to significant accomplishments in academia and the meat
industry. Kauffman was an innovative teacher and an effective coordinator of learning. During his career he
coordinated and taught in five department courses, and guest lectured in many others. It is estimated that
his teaching efforts were involved in 20,000 student credit hours, and he advised approximately 500
undergraduates, supervised 13 Ph.D. candidates, and 20 M.S. students. He developed the “Meat-Animal
Evaluation Approach” to evaluating livestock, providing a competitive program for animal science students
at the community college and university level. This approach focused on the evaluation of market animals,
breeding animals and carcasses in an organized and collective pedagogical environment. From the 1960s
until his retirement, Kauffman coordinated annual student meat-animal evaluation competitions—the
Wisconsin Meat-Animal Evaluation Triathlon, and a national contest, the Ak-Sar-Ben Meat-Animal
Evaluation Contest in Nebraska. Approximately 10,000 students participated in these events under
Kauffman’s leadership.

In addition, Kauffman initiated the “Academic Quadrathlon,” a four-part competition testing the knowledge
and skills of teams of animal, dairy and poultry science students. Teams compete in written exams, public
presentations, lab practical exercises and quiz bowls. The program was so popular that it spread from the
UW-Madison campus to agricultural colleges across the country. Today winning teams compete at the
various sectional annual meetings of the American Society of Animal Sciences. To date, more than 15,000
students from 50 colleges have participated in these events.

One of Bob Kauffman’s outstanding teaching accomplishments, and one which had closest association
with the meat industry and preparing students to work in it, was his “Livestock and Meat Marketing” course.
This course was annually limited to 12 students, utilized many conference calls with industry leaders
throughout the U.S., featured a whirl-wind three-day field trip around the Midwest to visit various industry
operations and required students to work in teams for much of the semester to address major industry
problems. The results of many of those projects continue to provide valuable insights into historical and
current meat industry situations.

During his tenure at UW-Madison, Kauffman conducted extensive research on meat animal composition
and quality. He conducted seminars for pork industry groups in 15 states and 10 foreign countries. During
sabbatical studies in The Netherlands, he discovered a fourth definable lean quality type in pork—red, soft
and exudative (RSE) lean. He was the leader of a research team at the university that patented the use of
sodium bicarbonate to improve color, tenderness and water-holding capacity in meat by its infusion into
pre-rigor muscles. Kauffman also led the development of three meat science bulletins which are used
around the world: “Porcine Myology,” “Ovine Myology” and “Guidelines to Evaluate Market Hog Performance
and Meat Quality.” In addition he has contributed five chapters to meat science texts, produced 10 films and
recorded 12 video tapes related to Animal and Meat Science.

Robert Kauffman has had a career marked by excellence in teaching of meat science, positively influencing
the students he has contacted, creatively providing new and stimulating methods of learning, and
discovering and communicating important information about meat animal composition and quality to
students, colleagues and the meat industry. For these most significant accomplishments, Bob Kauffman
is highly deserving of induction into the Wisconsin Meat Industry Hall of Fame.

Kauffman is married to Phyllis Ann Smith. They have two daughters, Rebecca (and Richard Henly) and
Ellen, and two grandsons, Alexander and Ian Campbell.