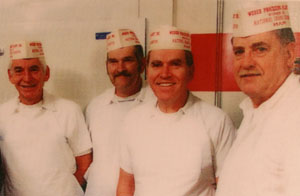 The Weber brothers—Reg, Norm, Lee and David—developed the Weber Meat processing
plant in Cuba City, Wis. into one of the outstanding smaller scale meat processing facilities in Wisconsin. Weber Meats, Cuba City, Wisconsin, was opened for business in 1947, by Otto Weber Jr. He was the second generation of Weber’s to be involved in the meat industry in Wisconsin. His father, Otto Weber Sr., was the first Weber to enter the meat business when he came to the United States from Switzerland shortly after the turn of the century and opened a butcher shop in Belleville, Wisconsin. Otto Jr., his two brothers and sister worked in the Belleville shop until 1929 when the young Otto took a sales job with Plankinton Packing selling meat to grocers and butcher shops.

His travels as a salesman took him to Cuba City, Wisconsin, where he met his future wife
Olive, a waitress at the hotel where he was staying. In 1931 he purchased a small meat
market and also got married. In 1936 he purchased a grocery store and ran both businesses until 1947 when he opened the current Weber Meats facility. In the years of 1939, 1941, 1943 and 1945 Otto Jr. and Olive were blessed with the birth of four sons: Reginal, Norman, Lee, and David. These four sons would later purchase the current plant and build it to today’s prominent status as one of the outstanding smaller-scale meat processing facilities in the state.

In 1945 Otto Jr. started a two-year project of building a modern meat processing facility,
which would include a slaughter house, processing room, and sausage kitchen with cured and smoked meat processing equipment. On June 22, 1947, the first hogs were slaughtered in the plant and on June 25th the plant was officially opened with a two-day grand opening. As the four sons got older, and Reg and Lee returned from military service, they joined their parents and continued to grow the business. In the spring of 1962 Otto Jr. passed away and the four sons purchased the plant. Their mother continued to be active in the plant until the time of her passing in 1999.

The Weber family has not only had a great impact on the Cuba City community and a large
area of southwest Wisconsin, but also the meat industry of Wisconsin and the nation. Reg has served as long-time Director for the Wisconsin Association of Meat Processors. He was an advisor to the Southwest Technical College’s “All Around Butcher Program,” and was instrumental in the building of a state-of-the-art meat processing facility for that program in the 1970s.

All of the Weber Brothers have participated in educational programs at the state and national level, which has greatly helped their colleagues with their processing techniques, especially the forming and production of boneless and semi-boneless hams. Their doors remain open to fellow processors who need help or direction with specific problems.

They have been leaders in high school educational programming for home economics, science, and agriculture students. They have opened their plant for FFA meat judging workouts and contests and financially sponsored the State FFA Meat Judging Contest. One interesting accomplishment of this plant is that they sold their high quality products at the prestigious Madison Farmers’ Market on the square for many years. Each Saturday morning, April through November, Lee and his assistants would make the 70 mile trip to Madison, to be set up by 6 am to offer their award winning cured meats and sausages to customers. They were a popular and much sought-after vendor, located on the same spot on the northeast corner of the square for 20 years.

All four of the Weber brothers are very active in their business and leaders in community activities. Reg is a longtime fireman as was his dad, Otto Jr. Norm served on the Cuba City school board for 20+ years and as president for several years. Lee has served on the city council, as well as being mayor, and also on his church council. David, more commonly known as “Mr. Cuban,” was active in the local Loins club, held the office of Tail Twister and supported every community and school function until the time of his passing in February 2003.

The Weber family can point to four generations of success in the meat business, and with their employees, have provided southwest Wisconsin with extremely high quality products and meat processing services for 56 years. For their outstanding accomplishments in growing Weber Meats to one of our state’s finest meat processing facilities, and for the leadership and service they have provided to their community, and state and national meat industry organizations, the Weber Brothers — Reg, Norm, Lee and David, are most deserving of being inducted into the Wisconsin Meat Industry Hall of Fame.