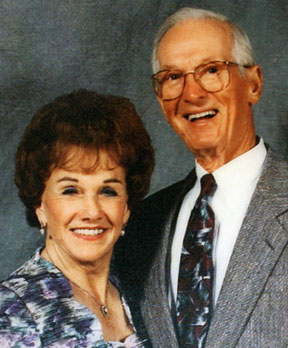 Until you have eaten a Johnsonville “Brat” while tailgating at a Brewers or Packers game you
simply haven’t lived! And if it hadn’t been for Ralph and Alice Stayer purchasing a small meat
market in Johnsonville, WI nearly 55 years ago, and transforming it into a world leader in
sausage production, Johnsonville “Brats” would have never existed!

Alice Brinkman was one of 14 children born to John and Mary Brinkman of Ahmeek, MI. John
was a copper miner and when the mine closed during the depression, he brought his family to
Milwaukee.

After graduating from high school, Alice received a scholarship to college but was unable to take
advantage of it because she had to help support the family by working as a secretary during this
time. She knew of Ralph F. (“R.F.” as he is known) Stayer because he was a friend of the
family. It took Alice and R.F. several years before they noticed each other, but when they did,
they became inseparable and were married in 1938. After marriage, they both worked and
sacrificed to achieve their dream of having their own business. They tried to buy a small, empty
shop and convert it into a floral shop in Milwaukee but the offer fell through, and after more
waiting the dream was finally fulfilled.

In 1945, the Stayers joined Carl and Anna Hirsch and founded Johnsonville Sausage in the
unincorporated village of Johnsonville. The facilities included a store, living quarters for the two
families, sausage kitchen, a small smokehouse and a separate shed for slaughtering. The Stayer-
Hirsch partnership thrived until it was dissolved because of Carl’s death. At this time the Stayer
family partnership was formed.

R.F. and Alice, together with their son Ralph C. and daughter Launa, built one of the largest
independent sausage companies in the United States. They have popularized fresh bratwurst
across the nation, which has also helped to increase the markets for bratwurst made by other
Wisconsin meat processors. Their company’s total yearly sales are now over $200 million, and
they employ more than 600 Wisconsin residents.

The Johnsonville Company slaughters over 10% of the sows butchered in the U.S. every year.
Much of the slaughtering is done at their Watertown plant, creating a market for many sows
raised in Wisconsin. The company also buys millions of pounds of beef, much of it coming
from culled Wisconsin dairy cows which have been slaughtered by other companies.

R.F. and Alice made a great team using their complimentary skills to build their business. R.F.
focused on making the best sausage he could and Alice handled the office tasks. Together they
withstood agonizing disappointments and shared the joy of their successes. Daughter Launa
Stayer-Maloney once said, “I can’t remember a time when my Mom was not by my Dad’s side.
She was always there.” Now in their semi-retirement, both of them are “always there” for their
10 grandchildren and 4 great grandchildren, as well as for the Johnsonville Company.