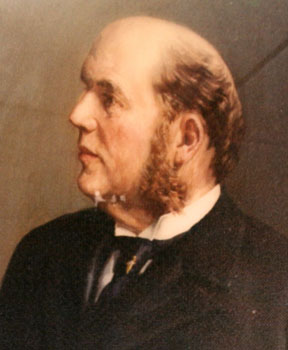 Philip D. Armour helped to make Chicago the center of meat packing in the United States in
the late 1800s, and his accomplishments led to the development of a great market for livestock
producers in the Corn Belt and the nation’s grazing areas.

Armour was born in 1832 at Stockbridge, NY. He began his career in the meat industry in
Milwaukee, joining the packing firm of John Plankinton in 1863 during the Civil War. This firm
became known as Plankinton and Armour. The firm grew rapidly, supplying Civil War military
needs, shipping meats to the East Coast, and establishing a European export market. Armour
expanded his interests after the war. A brother opened the Armour, Plankinton & Co.
commission house in New York, while another brother took charge of the Chicago office. In
1867, Armour & Co. began packing hogs in Chicago. In 1875 Armour moved to Chicago and
expanded the business to include cattle and sheep slaughter.

In 1878 the railroad refrigerator car was perfected, and Armour immediately recognized its
potential. When the railroads refused to build refrigerator cars, Armour built his own. Business
grew rapidly, as it had previously been impossible to get fresh meat in the “off season.” Armour
expanded his Chicago operation and opened branch packing plants in Kansas City, St. Louis and
Cincinnati, along with business offices in New York, Liverpool and London. He expanded into grain
shipping, and developed Armour Canned Meats and exported them to Europe.

A frugal Yankee by birth, Armour hated waste. One story goes that when asked what parts of a
pig he used in his business, he replied “Everything but the squeal.” True to his word, he
manufactured glue, fertilizer and soap from meat-processing byproducts, rather than paying to
have the byproducts hauled away, as had been the industry custom. Today, the Dial Soap Co. is
a “spinoff” of Armour’s byproduct business.

In 1892 Armour donated funds to establish the Armour Institute of Technology in Chicago to
give technical training to underprivileged boys. Today the institute is now the Illinois Institute
of Technology. He died in 1901 at the age of 68.