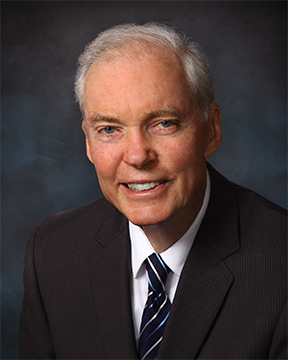 Patrick J. Luby was born May 20, 1930 and grew up on a dairy farm near Zanesville, Ohio. He attended the University of Dayton, receiving a B.A. Degree in Economics and Mathematical Statistics in 1952. His M.S. and Ph.D. Degrees (1956) were from Purdue University. He majored in Agricultural Economics, his mentor being the renowned agricultural economist, Dr. Cliff Cox, who later became president of Armour & Co. After graduation he married Peggy Jauron and they are the parents of four children, James, Julie, Mary Pat and Robert.

As an Assistant Professor of Agricultural Economics at Purdue University he conducted research. In 1958 the Oscar Mayer Company invited him to join their firm. He accepted and he and his family moved to Madison, Wisconsin. He became responsible for agricultural economic forecasting. From 1966 until his retirement he served Oscar Mayer first as General Provisions Manager (1966-1971), then as General Manager of Provisions and Livestock Procurement (1971- 1974), and was then elected Vice President as the corporate economist (1974-1992). His greatest contribution was in his ability to advise the Company with strategies to determine frozen meat inventories and to hedge livestock and meat commodities. Most of his time was spent assembling data to study market movements and trends and predicting future prices of livestock and meat commodities. The CEO, Mr. Oscar Mayer, Jr once exclaimed, “Pat Luby is indispensable for conducting the Company’s business!”

Dr. Robert Bray of the University of Wisconsin’s Meat & Animal Science Department invited Pat to participate in a Livestock & Meat Marketing class. For the following three decades Pat became intricately associated with this class, providing lectures, counseling individual students, and attending field trips to the U. S. meat industry. Having a person of Pat Luby’s qualifications available for those classes and field trips was a significant asset to the pedagogical progress of coordinated learning.

For Pat Luby, economist, to provide the Oscar Mayer Company with useful analyses and projections of future prices and trends, his first responsibility was to select accurate and appropriate data about livestock numbers and inventory, inventories of various meat commodities, trends and projections in livestock production, and projections and trends in meat consumption. USDA data were the primary sources. He continually adapted his expertise and ability to analyze primary data sources as computing capabilities increased rapidly over the years. His ability to accurately interpret the data available to him and to make wise conclusions and projections from his analyses was invaluable to the success of the Oscar Mayer Company. Even though much of this information was confidential, he was permitted to provide general information for educational institutions, industry organizations such as the American Meat Institute and the National Pork Producers Council, and the public media. After retirement he continued to consult for the Oscar Mayer Company and also helped the University of Wisconsin as well as livestock and meat organizations.

When the Wisconsin Meat Industry Hall of Fame was initiated, Pat served on the first selection committee. For the next decade Pat faithfully contributed significantly to the challenges of the committee. His judgments and thoughtful suggestions were accepted with unquestioned respect. During this time, the University of Wisconsin Departments of Animal Sciences and Agricultural and Applied Economics presented him the title of Adjunct Professor. His personality, knowledge and willingness to provide ‘free’ advice and understanding in such educational settings was in itself an unquestionable asset for the faculty and students. In other ways he served the College of Agricultural and Life Sciences and the University such as contributing annual articles to the STATUS OF WISCONSIN AGRICULTURE publication. He served his industry as a board member of the National Live Stock and Meat Board and a member of the Chicago Mercantile Exchange.

In summary, Dr. Patrick J. Luby is one of the most deserving recipients recognized by the Hall of Fame. In his years of professional activity serving the Oscar Mayer Company, Pat became one of the most dedicated, respected and knowledgeable livestock and meat marketing authorities in the United States. He understood the importance of reliable data to make accurate predictions and sound judgments. His economic analyses and projections were critical to the business success of the Company. He willingly shared general knowledge of his work to educators, agricultural organizations and the public media. After retirement he continued to consult for the Oscar Mayer Company as well as to help livestock organizations.

Pat assisted with marketing classes at the University of Wisconsin’s Departments of Animal Sciences and Agricultural and Applied Economics. We was appointed Adjunct Professor in both departments and frequently gave lectures, consulted with faculty and offered advice for graduate research projects. Despite his demanding responsibilities at the Oscar Mayer Company, he provided extensive time serving on many selection committees of the Wisconsin Meat Industry Hall of Fame.