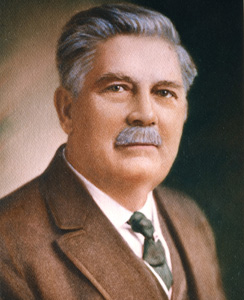 Patrick Cudahy was born March 17, 1849 and died July 25, 1919. Because of the great Irish famine, his
family moved to Milwaukee three months after he was born. At age 13, he began working as a “carrying boy”
for packer Edward Rodis. At age 25, he became superintendent of Plankinton and Armour, Milwaukee’s
largest packer, and in 1888 Patrick and John Cudahy (Patrick’s brother) took over the business. John was
always a silent partner, but the company held the name “Cudahy Brothers” until 1957.

In the 1870’s, Patrick was instrumental in moving the industry from barreled pork to a cured meat business.
For many years the company’s main business was supplying European markets with cured pork, but in the
1920’s the business was forced to change because Britain imposed tariffs on American products, giving
preference to products imported from Commonwealth countries. Cudahy Brothers employed between 1,000
and 1,500 workers at this time, and shifted their production to the domestic scene, specializing in semi-
perishable canned hams (one of the first U.S. packers to produce this product), sliced dried beef, Italian-style
sausage and sliced bacon.

In the 1880’s, Patrick purchased 700 acres of land in what is now Cudahy, Wisconsin, and in 1889, a new
plant was built on the site. The panic of 1893, soon after, threatened the company, but the business survived
four years of economic struggle, and emerged with a strong foothold in domestic and export trade. In the
1890’s the Wisconsin village was named Cudahy. Many plant workers bought lots in the area, and paid for
them by deductions from their pay. Patrick named many of the streets in the growing community after meat
packing industry friends, such as Philip Danforth Armour and Gustavus Franklin Swift. The company
advertised for workers in foreign language newspapers, and attracted hundreds of immigrants from Poland,
Germany, Ireland, and Austria-Hungary, along with Czechs, Moravians, and Slovaks. Workingmen’s hotels
popped up in Cudahy. A statue of Patrick Cudahy has been erected in that community.

Patrick Cudahy had a bittersweet relationship with the village of Cudahy. This apparently existed for a
number of reasons, one of which was the fact that he supported temperance, and fought against liquor. He
argued with the Cudahy Common Council about the spread of taverns in the village. Never-the-less, he
provided many benefits to the community, including helping to start other industries and building a library. He
said, “It is a source of satisfaction to me to look over those 25 years and see what has been accomplished,
but I would feel much better if there were not the antagonistic spirit in Cudahy which seems to prevail to a
great extent among its citizens.”

Cudahy Brothers had a role in the development of the Green Bay Packers. In the earliest years the team was
sponsored by Bonner Packing Company of Green Bay. When the plant folded, the players came to work for
Cudahy Brothers, and traveled to Green Bay for weekend games.