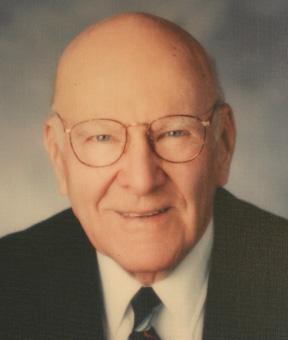 Oscar Gustave Mayer was the third generation to guide the family business, and he led it through
many years of success through innovation. Because of his leadership, the business went from a
regional company to the nation’s leading manufacturer of brand identified processed meats.
He was born March 16, 1914 in Chicago, Illinois, the oldest son of Oscar Gottfried Mayer
(named to the Wisconsin Meat Industry Hall of Fame in 1993) and Elsa Stieglitz. He graduated
from Cornell University and studied at Harvard Business School. In 1942 he married Rosalie
Harrison and they had three sons — Oscar, Donald and William.

He started officially with the company in 1936 as a production trainee. In 1946, after serving in
the Chicago plant in various manufacturing positions, Oscar and his family moved to Madison,
Wisconsin, where they still live. He was named as Assistant to the Vice President of Operations,
and as such was responsible for the operations at Madison as well as the newly acquired
Davenport, Iowa plant. In 1955, at the age of 41, he became president. The company went
national in 1965 and Oscar became chairman of the board in 1966. The company stock was
traded on the New York Stock Exchange in 1971. On May 31, 1977, he retired as chairman of
the executive committee after forty-one years of service to the company.

During his early leadership, product manufacturing specifications were developed. He believed
that if the company could follow specifications to produce products for the government, they
could also do it for their own. In fact, he wrote some of the earliest specifications himself. The
development of these specifications led to formation of the Product Control Department. Most
of the original guidelines developed during his tenure are still being used today, not only by
Oscar Mayer Foods, Inc., but by many other companies throughout the meat industry.
Growth and expansion continued and with it more internal programs were initiated to identify
and promote the products. A national advertising agency was hired and in 1964 the first Oscar
Mayer jingle “Oh, I wish I were an Oscar Mayer wiener . . . ” was aired in Chicago with
tremendous success.

Research and development were critical to the achievements of the company. Under the
direction of Oscar, the company led the industry in development of equipment, packaging and
quality improvements. The concept of sectioned and formed meats, vacuum packaging of
processed meat to greatly extend shelf-life, and process automation like the twenty-eight minute
continuous wiener process (“hot dog highway”) were developed under his leadership.
He knew that to maintain high standards of quality, the company had to have good people. He
believed that you “pick good people and encourage them.” He installed a management training
program which is still in existence. He hired the first African-Americans in the Madison plant
and never tolerated any kind of segregation. He had an open door to employees and accepted
the union when it was formed.

He has served society in many ways. He was chairman of the American Meat Institute and led
the regional JOBS campaign and U.S. Savings Bonds drive. He served as a director of the
Federal Reserve Bank of Chicago from 1973 to 1978. In Madison, he headed the community’s
first United Way campaign in 1950 and served as director of the YMCA, Chamber of Commerce
and Madison General Hospital.

On May 29, 1977, the University of Wisconsin awarded him an honorary Doctor of Law degree
in recognition of his service to society.

In the retirement of Mr. Mayer, P. Goff Beach remarked, “In many ways, because the world in
recent years has grown so cynical and so critical of business and industry, the third Oscar has
had the most difficult task of all in preserving the unique “personality” of Oscar Mayer & Co.
That he has done it is a special tribute to him.”