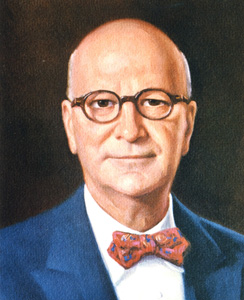 Oscar G. Mayer was born March 10, 1888 in Chicago, Illinois, five years after the family company was founded
on Chicago’s near north side as a small retail meat market, and died March 5, 1965 in Chicago. While Oscar
F. Mayer and his brother, Gottfried, were the founders of the Oscar Mayer firm in 1883, Oscar’s son, Oscar G.
Mayer, was largely responsible for some of its greatest growth as the firm went from a small regional firm to a
position as the nation’s leading manufacturer of brand identified processed meats.

Oscar G. literally grew up in the business. On Saturdays and often after school he worked in his father’s store,
putting up orders and making deliveries. He learned the business from the ground up from his father and his
uncles, Gottfried and Maximilian.

Later he remembered his early years: “We lived `over the store’, where I at an early age established intimate
contact with my life’s job and with our lusty workers. These sturdy, able men, each sporting a luxuriant handle-
bar, or more accurately, an awning mustache, worked an 11-hour day with my father and uncles — somewhat
less on Saturday with its steamy, noisy clean-up”.

After Oscar G. Mayer graduated from Harvard in 1909 with a Phi Beta Kappa — he specialized in business,
economics and accounting — he joined the family business and eventually, under his leadership, the
company expanded enormously.

In 1913, he was married to Miss Elsa Stieglitz and they had three sons: Oscar G., Jr., Harold M. and Allan C.
and a daughter, Eleanor.

In 1919, Oscar G. was visiting relatives in Madison, Wisconsin. He saw a bankrupt farmer’s cooperative meat
packing plant up for sale and recommended to his father that they buy the cooperative to obtain a source of
raw materials. From its founding, the company had relied on other meat firms to supply raw materials. This
was the first expansion outside of the original operation in Chicago. In the ensuing years, the company grew
steadily. The Mayers plowed earnings back into the company and paid small dividends.

The company was incorporated under the name Oscar F. Mayer & Brothers in 1911 and in 1919, the name
was changed to Oscar Mayer & Co., Inc. He became president in 1928 and under his leadership the company
stressed quality in manufacturing. In the 30’s, the company started banding its sausage products so
consumers could identify them as Oscar Mayer. In 1936, they started using a midget chef and a
Wienermobile, a vehicle shaped like a hot dog on a bun, to promote their products. The Wienermobile (there
are now six in the United States) is still being used today and is one of corporate America’s most
recognizable symbols.

In the mid-40’s, the firm’s far-sighted programs put new emphasis on packaging, merchandising and
advertising. Also undertaken by the company was increased distribution facilities, advances in engineering
and food technology research, and more rigid controls for consistent quality. In 1950, the company developed
the Slice Pak, the first vacuum-sealed package for meat products. The company acquired other
manufacturing plants, developed outstanding manufacturing equipment, later pioneered the move to peg
board sales of luncheon meats in supermarkets and did an outstanding job of meeting consumer needs with
high quality meat products.

Oscar G. became chairman of the board in 1955, after his father died at age 95. Also that year, when he was
67, he spoke to the student body of Beloit College and presented his personal philosophy, his “Plan For
Living”. His plan called for three basic action principles: 1. lifelong personal development, 2. generous
consideration for others, and 3. due service to society to pay society back for the benefits one has derived.

By the early 60’s, all of the efforts at growth, quality and serving consumers resulted in the company earning
the position as America’s leading manufacturer of brand-identified processed meats, a position it still holds
today.

Oscar G. Mayer remained chairman of the board until he died in 1965 at age 76. In the years he headed the
firm, sales increased from about $4 million dollars annually to $220 million, employment increased from
several hundred to 8,500, and Oscar Mayer became a household name across America in the state and
national meat industry, especially in representing the interest of small businesses.