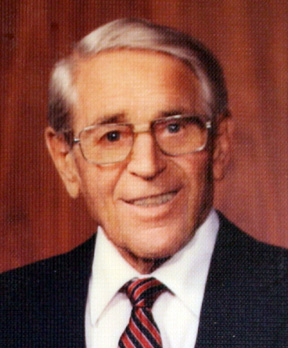 Milton Peck led the company he founded to national prominence. He rose from the ranks of
butcher and boner to become manager, owner and a leader in his industry. Through Peck
Packing Company, he was a consolidator and survivor of what once was a thriving nucleus of
beef slaughterers located in the greater Milwaukee, Wisconsin area. Milton Peck was
progressive and forward thinking, and was always at the forefront in technology and
productivity. He lived to see the company he had built, along with his sons Bernie and Emmett,
become a division of Sara Lee Meat Group in 1985.

Milton Peck was born July 4, 1904 in Milwaukee, the son and grandson of a meat industry
family who had immigrated from Czechoslovakia in the 1800’s. By the time he was ten years
old he was leading cattle to the slaughter house. He left high school after two years to work full
time with his father in the family slaughter house located at 14th and Meinecke streets in
Milwaukee. He knew all phases of the industry, but specialized in buying cattle and would drive
to Chicago at 4:00 am several days a week to buy top grade fed cattle at the stockyards.
He married Lillian Resnick in 1925. The Peck and Resnick families both operated packing
plants, and eventually the Peck and Resnick businesses were merged to form Monarch Meat
Packers Company. During World War II he leased his plant to the National Tea Company and
worked for them as an employee.

In 1951 he purchased the Ideal Packing Company and became the first packer in the area
specializing in slaughter and boning of cows and bulls. Automated kill lines and moving top
boning tables were included in the operation as they became available to the industry. As the
packing industry changed in Milwaukee, the Peck Company not only survived but grew from
180 employees to 800 employees and three additional plants. In 1985 Peck Packing Company
became a division of the Sara Lee Meat Group and became known as Emmber Foods.
He was progressive and forward thinking and always at the forefront of technology. He was held
in the highest regard and respected by his employees. His word was his bond.

Peck Packing Company pioneered the muscle boning and separation of cuts for specialized uses.
Some examples would be early-on sale of round cuts to Patrick Cudahy for dried beef
manufacture, segregation of rib rolls to fast food chains for beef sandwiches, and later the
manufacture of restructured beef for thin slicing to national chains.

He was a philanthropist and established many foundations which remain active in supporting
local and charitable causes. Major donations include the Peck Pavilion at the Marcus Center for
the Performing Arts, the Peck Auditorium at the Jewish Old Home, The Peck Welcome Center at
the Milwaukee County Zoological Gardens, and the Aquatic Center at the Jewish Community
Center.

He was a pioneer and survivor who progressed steadily and continuously. He died April 14,
1988.