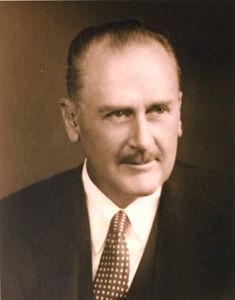 Michael F. Cudahy, the oldest of Patrick’s sons, was born May 27, 1886 and died May 20, 1970. He graduated
from the University of Wisconsin, joined the company as Treasurer in 1908, was appointed Vice-President in
1909, was appointed the company’s Executive Manager in 1913, and became President after his father’s
death in 1919. Michael remained as President until 1961, when his son Richard D. Cudahy succeeded him.

Michael F. Cudahy guided the company through many problems and was responsible for initiating
numerous, progressive changes. The company provided a strong compensation package for returning
veterans and families of deceased veterans of World War II. It provided jobs for displaced European
Nationals during World War II. On the other hand, organized labor and strikes gave the company
considerable trouble.

It was the first company to install a sharp freezer (1930) and was justifiably proud of the laboratory and
experimental kitchen. They were recognized by the American Humane Society for using the electrical
stunning method. The motto of “Home of Sweet Apple Wood Smoke Flavor” is well known. It was a large
producer of dried beef products which were packed under 79 different labels.

In the 1970’s, a new stockyard was built at the plant, and Patrick Cudahy was a major purchaser of hogs
from Wisconsin, northern Illinois and eastern Iowa. At that time, the company was slaughtering 1.5 million
hogs and producing 1.5 million pounds of dry sausage, annually. In recent years, the company underwent
the following transition. Beef slaughter was stopped in 1964, but the company still processed and sold beef
cuts. Patrick Cudahy was sold to Bluebird, Inc., of Philadelphia in 1971.

Bluebird (including Patrick Cudahy) was sold to Northern Foods of England in 1980, and in 1984, Patrick
Cudahy was again sold; this time to Smithfield Foods of Virginia. Upon demands for cuts in labor rates, a 28-
month strike began in 1987. In 1988, the company closed its hog slaughter, and became a specialty meats
manufacturer. A total of 370 people now work there.

Richard D. Cudahy, Patrick’s grandson wrote in 1989, “Patrick Cudahy is a fine enterprise which, though
sorely abused at times, has managed to survive for 100 years in pretty much the same quarters it began.
Come to think of it, that is pretty amazing.”

Patrick and Michael F. Cudahy built a large packing company, survived many external and internal obstacles,
slaughtered more hogs than any other Wisconsin packer for many years, and produced a broad and well-
recognized product line.