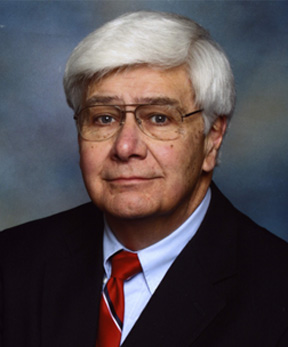 Dr. Larry Borchert, born, raised and educated in Wisconsin, is an industry thought leader who
we are proud to have in the Wisconsin Meat Industry Hall of Fame.  He is one of the titans of
meat science in the United States, having been recognized with numerous awards from the
American Meat Science Association (AMSA) and American Meat Institute.  He is a past
president and director of the AMSA and was chairman of their educational foundation.  Larry
has been married to his wife Alice for over 45 years and they have two sons, Brian and Eric,
and two granddaughters.

Larry Borchert was born in La Crosse, Wisconsin on May 27, 1939 and raised in a small village
in the driftless region of the state.  After high school he enrolled at the University of
Wisconsin – Madison where during his undergraduate studies, he worked at Oscar Mayer Foods
and found his calling in the meat industry. He obtained his BS in food science, then earned MS
and PhD degrees in food science and meat science with a minor in biochemistry.  For his thesis
research, Larry studied the PSE quality issue in pork and demonstrated the value of rapid carcass
chilling. While a graduate student he developed a commercial meat processing course that is still
offered at the UW.  He conducted postdoctoral research at the Danish Meat Research Institute
and the Max Plank Institute in Germany.  After a 30-year Oscar Mayer career, he came back to the
UW-Madison where he is an Adjunct Professor of Meat Science.

At Oscar Mayer, Larry advanced from laboratory technician and finished product inspector through
positions of increasing responsibility prior to retiring in 1996 as Director of Central Research. During
his early career, Larry developed processes to improve the drying of hard salami as well as
technologies supporting fresh meat retailing.  He also recognized a PSE-like situation in the
“summer yield problem” of turkey breast meat used by the Louis Rich subsidiary of Oscar Mayer.
He integrated the work of hisgroup to manage the issue within live animal production and harvesting.
He also made turkey breeders aware of the condition and convinced them to address it in their
genetics programs.

In the 1980’s the meat industry was searching for methods to improve process control, more
accuratelymeasure quality parameters and provide nutritional information to customers.  Under
Larry’s leadership, Oscar Mayer was at the forefront of evaluating new analytical equipment including
instruments for protein analysis and portable colorimeters for color evaluation.   Likewise, when he
was exposed to a new DuPont technology to analyze ribosomal DNA of bacteria, he directed his
microbiology group to assist them in evaluating the applications in meat microbiology. This led to the
development of the Riboprinter and BAX instruments which are now standard genetic fingerprinting
tools for the entire food industry to assay for pathogens such as Salmonella, E.coli 0157:H7 and
Listeria monocytogenes.

The safety of sodium nitrite used to cure meat has been controversial since the late 1960’s.  Larry
directed numerous projects at Oscar Mayer and represented the company on industry scientific
committees that created an understanding of the risks around nitrite use, its role in nitrosamine
formation and practical solutions to minimize potential nitrosamine formation. Their work led to
elimination of the use of nitrate, lowering the levels of nitrite used, using ascorbate to inhibit
nitrosamine formation and developing monitoring programs to analyze for volatile nitrosamines in fried
bacon – the one product that required special procedures.  He also became an industry spokesman
on the benefits of nitrite as a safe curing ingredient that controlled botulism risk, delayed spoilage
and improved product quality.  The controversy reignited in 1994 with reports of epidemiological
research on childhood brain cancer in the popular press, which both alarmed and confused
consumers.  Larry led the American Meat Institute effort that addressed this issue and laid it to rest.
In 2000, he provided key testimony at a National Toxicology Program review of animal feeding tests
that demonstrated sodium nitrite is not carcinogenic.

In the area of risks posed by pathogens associated with meat products, Larry again has had a
profound influence on the meat industry.  In the 1980’s he directed research that demonstrated the
anti-botulinalbenefits in using sodium or potassium lactate as ingredients in uncured ready-to-eat
refrigerated processed meats.  At the time, this was a rapidly growing category of products and
many were concerned about the potential for a botulinal poisoning outbreak if they were temperature
abused.   Oscar Mayer patented the concept and benefited from the royalty stream as other
processors adopted the technology.  A side benefit was increased shelf life of the products.

After retiring, Larry, in cooperation with Oscar Mayer, created and continues to co-direct a week long
processed meats course for company employees at the UW.  He also became a scientific advisor to
the American Meat Institute and, in addition to his work regarding sodium nitrite, he communicated
the benefits of integrated thermal lethality calculations to evaluate adequacy of cooking processes
against pathogens. This resulted in the development of a simple spreadsheet placed on the AMI
website which processors regularly use as they develop new products and establish HACCP plans
that meet regulatory requirements.

He also began volunteer activity that took him to Russia six times on United States Agency for
International Development sponsored missions to teach modern meat processing principles at
technical schools and to small processors.  During these trips he introduced the concept of
producing dried meat jerky products for situations where refrigeration is a limiting factor.

The Wisconsin Meat Industry Hall of Fame is proud to induct one of the giants of meat science,
Dr. Larry Borchert.