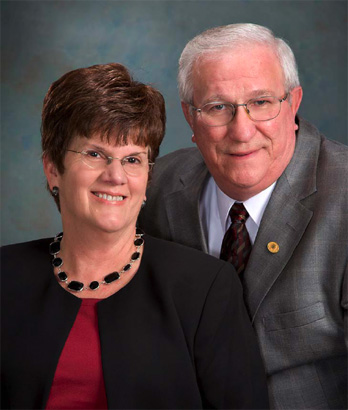 Kris Knebel Bisarek was born in Lafayette County, WI the first of four daughters of one of the original inductees to the Wisconsin Meat Industry Hall of Fame, Clarence Knebel and his wife Lela Knebel. She graduated from Belmont High School and attended Carthage College in Kenosha and the University of Wisconsin-Platteville.

Ken Bisarek was born in Iowa County, Wisconsin the ninth of ten children of Michael and Mary Bisarek. He was raised on a dairy farm. He graduated from Iowa-Grant High School and the University of Wisconsin-Platteville.

Ken and Kris Bisarek met in the late 1960’s at Knebel’s processing plant in Belmont, Wisconsin. The late Clarence Knebel generously shared his immense knowledge about the industry with them. They learned the importance of quality and consistency in producing top-of-the-line products. They have passed on their knowledge and skill to many others.

After graduating from UW-Platteville, Ken joined Southwest Wisconsin Technical Institute as an instructor to help start a meat cutting program. Many of Ken’s students went on to own and operate their own meat processing plants. Several of these students were employees of Ken and Kris’ through the years.

In 1977, Ken and a partner purchased a bankrupt meat plant in Norwalk, WI. Two months later, the plant, known as Alpine Valley Meats, was opened. In 1978, Ken and Kris married and began running the Norwalk plant together.

Ken and Kris were very active with local 4-H and FFA students, opening their doors for carcass shows and helping judging teams learn about meat cuts and carcass grading. Two of their children represented their local FFA chapter and the state of Wisconsin in Kansas City at the national meat judging contest in 1989.

Ken was elected WAMP director and also served as vice president. He soon became president after the untimely death of Ken Heid and with Kris helping all the way, led the organization.Together they provided the leadership needed to keep WAMP a highly respected organization.

In 1998, Ken and Kris sold their Bloomington plant to an employee. Still they continued to be involved in the meat industry. From 1999 to 2007 they jointly served as executive secretary for WAMP. They also have helped many plants write and implement HACCP plans, organized conventions and scheduled many workshops along with various other duties tied to WAMP. They have served as product show judges at state shows and the state fair.

Ken and Kris are parents of four children, Candi, Curt, Melissa and Renee, and have seven grandchildren. They are very active members of the Bloomington United Methodist Church. Ken is currently the council chair for Faith Alive, a six church charge in the Southwest Wisconsin area. Kris is an Ad council member of Bloomington United Methodist Church. Recently, Kris has started a snack sack program through their church and local school system to supplement the diet of local children on weekends. Ken has served on the Southwest Tech advisory council and the Bloomington village board. He has also served on the South Central Wisconsin Realtors Association board of directors. Both Ken and Kris are licensed realtors, and own their own real estate business.

For their contribution to the meat industry, to their fellow meat processors, and to their community, we are proud to induct Ken and Kris Bisarek into the Wisconsin Meat Hall of Fame.