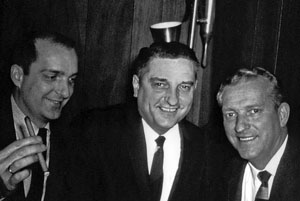 Almost fifty years ago, the Klement brothers purchased Badger Sausage, a small sausage company on the south side of Milwaukee. At the time, it consisted of one stuffing machine and three smoke houses. In 1961, the brothers changed the name to the Klement Sausage Company, Inc.

Soon after, the Klement brothers tapped into the expertise of European-trained sausage makers in the area, including their father Frank. He came out of retirement as a consultant to help them formulate recipes that would appeal to the sausage lovers in Milwaukee who had emigrated from Europe.

In the early days, the foundation of the business was built primarily on three products—the company’s German bratwurst, Italian sausage, and savory Polish sausage. Now the company produces more than 100 varieties of sausages for delicatessens, self-service cases, food service and snack use.

From its humble beginnings as a small sausage kitchen with a handful of employees, the Klement Sausage Company has grown through five expansions into Milwaukee’s largest producer of sausage and prepared meat products and a nationwide supplier of these products. Today it has two state-of-the-art plants and more than 400 employees.

The second kitchen is the cooked and smoked kitchen, where seasonings and curing
ingredients are added to the meat, and products are hardwood smoked and cooked for flavor and consumer safety. The third kitchen is used to manufacture a variety of summer sausages. Klements was one of the first companies to vacuum package their summer sausages for the retail marketplace to eliminate shrinkage. They have supplied this product to virtually every major gift box company in Wisconsin. Twice a week Klement sausage products are distributed by a fleet of refrigerated trucks to stores throughout Wisconsin. In addition, products are also distributed to chain store warehouses throughout the nation. The sausages are also sold in gift boxes in all 50 states and in several countries overseas.

Much of the company’s success can be attributed to the Klement brothers’ division of labor. John’s executive presence guided the company’s growth and expansion, while Ron headed up the sales department. George, like his father, became a highly skilled sausage maker. Today children of the brothers are involved in the business. There are five second-generation relatives holding key positions in the company.

Dedication to quality and freshness has helped the sausage company garner several awards for their products. At the Wisconsin State Fair in 2004, the Klement Sausage Company, Inc., won the Seal of Excellence Award for its cooked ham, and has also won the excellence award for its meat snack sticks and turkey breast. Klement’s summer sausage and snack sticks have also been winners in the annual State Fair Meat Product Show.

Klement sausages are highly visible at Miller Park in Milwaukee. They are sold at the Klement Sausage Haus there and are seen in another form—as the famous “racing sausages.” It is a demonstration of the company’s involvement in their community.

Ronald Klement died in 1994 at the age of 58. He was married to Edith, and they have five children-Debbie, Ron, Robert, Danny and Ellen.

George Klement died in 1996 at the age of 77. He was married to Helen, and they have four children- Roger, Tom, Chris and Mary.

John Klement died in 2002 at the age of 83. He was married to Ester, and they have four children-Kathy, John, Jim and Jeff.

These three brothers are being inducted into the Wisconsin Meat Industry Hall of Fame to recognize how they started with a small sausage company in Milwaukee in the 1950s, and over a half century developed and grew that company into a major meat processor, whose products today are enjoyed nationwide and overseas. For that most significant accomplishment, Ronald, George and John Klement are highly deserving of this honor.