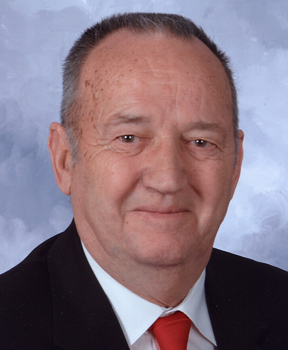 Jim Kalscheur bought a small meat market in Madison, Wis., in 1958, renamed it UW Provision
Company, Inc., and turned it into a multi-million dollar meat distributor and processor of fresh
meats. In addition, Kalscheur is recognized for his generosity to community organizations and his
support of the UW athletic departments.

Kalscheur was born in 1929 in Pine Bluff, a small community west of Madison. He grew up on a
farm but moved with his family into town after he developed hay fever in the eighth grade. He began
his career in the food industry by working at the Ortman grocery store in Pine Bluff in grade school
and high school. After high school Jim worked for 10 years for Esser’s Wholesale Market in
Madison. In 1958 he bought a small meat market which had six employees, known then as the UW
Meat Market. It had that name because it was located on University Avenue in Madison, and was
near the University. In 1962 Kalscheur renamed it the UW Provision Company. The operation later
moved to Bell Street on Madison’s south side, and in 1972 it relocated to its current location in
Middleton, Wisconsin, just west of Madison.

Today the company employees more than 100 people, occupies a plant that measures 100,000
square feet and has annual sales of more than $100, 000,000. But despite its growth, UWP still
serves small mom-and-pop stores, as well as supermarkets, meat processors and HRI (hotel,
restaurant, institutional) operations. Kalscheur continues to oversee day-to-day operations. Over the
years UWP has been a leading innovator in the meat processing industry. They were one of the first
to further fabricate “boxed beef,” which was becoming the primary way beef was sold in the 1970s. It
would break down wholesale cuts into “sub-primal cuts” such as inside rounds, strip loins and
ribeyes, and individual boneless steaks, and distribute these to their customers. This forced others
in the industry to follow suit and also to imitate UWP’s success selling boneless cuts.

As a pioneer in the industry, UWP is recognized for the following path-breaking steps: *Use of
telemarketing techniques. UWP realized the importance of telephone sales calls to expand its
customer contacts, instead of the then customary sales person going store-to-store. From UWP’s
beginning, phone calls were responsible for 100% of its sales. The telephone made possible
larger numbers of contacts, eventually replaced by computers, which have exponentially increased
the number of contacts. *Vacuum-packaged steaks. UWP was one of the first to use this concept for
selling meat to restaurants. *Blast freezers. In the 1970s, UWP installed state-of-the-art blast
freezers, which were not commonly used at that time by distributors and steak cutters. The rapid
freezing of the meat brought about by very low freezer temperatures and rapid air movement lock-in
superior meat quality.

Kalscheur is also known as a generous civic backer. His generosity to Pine Bluff has resulted in the
building a community park, playgrounds and athletic fields. He also built an addition onto the Pine
Bluff church he attends. Each summer Jim hosts handicap children at his farm for a fishing outing.
Over a 20-year period, a steak fry outing Kalscheur and other members of his staff initiated has
raised over $6 million for the UW Athletic Department. UWP bore all the expenses for the outings.
The proceeds from the first steak fry were $20,000. The proceeds from the last one were well over
$500,000.

Steve Badalich, retired vice president of UWP, said, “This major meat industry individual should be
inducted into the Hall (of Fame). My advice would be run, don’t walk, to nominate this man. How do I
know? I was a UWP VP and minority partner for 32 wonderful years until my retirement some 12
years ago.”

Because of Jim Kalscheur’s leadership in developing UW Provisions from a 6 person operation to
a company with over $100 million in sales, and his dedication to its growth into one of Wisconsin’s
leading processors and distributors of meat products, he is indeed highly worthy of induction into
the Wisconsin Meat Industry Hall of Fame.

Kalscheur is married to Joyce. They have three children: Scott, Amy and Steve, who works for the
company. Jim and Joyce have seven grandchildren, which are a great joy to their lives.