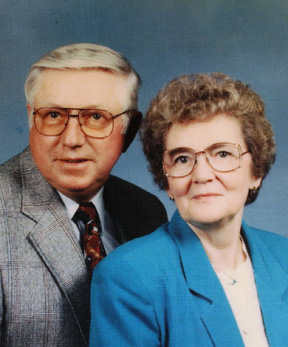 James and Evelyn Hewitt are recognized for their accomplishments in building their company,
industry and association in Wisconsin. They made a mark on the Wisconsin Association of Meat
Processors because of their behind-the-scenes work, and because of their willingness to share.
They insisted on only the absolute best educational programs for training and sharpening the
skills of their fellow meat processors. They developed new programs, were involved in
legislative matters, took leadership roles and put helping other people in their profession above
all else.

Jim, as he has always been called, was born in Flint, Michigan on June 28, 1927 and at the age of
four moved to Marshfield, Wisconsin. Evelyn was born in Wood County, Wisconsin on March
21, 1928, and Jim and Evelyn were married in 1946. They have three daughters and six
grandchildren. Their processing plant, founded by Jim’s father in Marshfield, Wisconsin, is one
of the most progressive in the state.

Jim has had a leadership role in and contributed to a large number of organizations and activities
in his local community, state and nation. He has been director, treasurer and president of the
American Association of Meat Processors (AAMP). He has also served as a director of the
Wisconsin Association of Meat Processors (WAMP) for 39 years, during which time he served
as treasurer, president, and executive secretary. He has served as a legislative advisor for both of
these organizations and was strongly involved in establishing the Wisconsin State Meat
Inspection program. He has received many prestigious awards including WAMP’s Meritorious
Service Award, AAMP’s Man of the Year Award, Wisconsin Pork Producer’s Industry Award,
Wisconsin Friend of 4-H, the Gold Cleaver Award for Outstanding Service to the Wisconsin 4-H
Foundation, and the University of Wisconsin College of Agricultural and Life Science’s
Honorary Recognition Award.

Evelyn has been a true partner to Jim throughout his career and a tireless worker with him in
many of his accomplishments. They have been a true team working together. Evelyn has also
been recognized by WAMP with the Meritorious Service Award as well as AAMP’s “Man” of
the Year Award.

Jim has always displayed a commitment to excellence, and a competitive spirit in the many
endeavors he has pursued. His accomplishments are tied to his strong belief in education, and
his desire to help other people. His biography contains programs, relationships and recognition
which were associated with high school, vocational-technical and university education. Also,
from an international perspective, Jim has shared his expertise. In 1976, he spent several weeks
in Nicaragua helping establish a municipal slaughter house and meat processing plant.
Jim and Evelyn have been strong supporters of education for meat processors. As a WAMP
director, Jim played a key role in developing educational programs for fellow processors at
association spring conventions and fall workshops. Both Jim and Evelyn have maintained very
close ties with meat science programs at University of Wisconsin campuses, and have
encouraged their development of Sausage manufacturing Workshops and other clinics
specifically tailored to help Wisconsin’s small meat processors.

In the early 1950’s, Jim and Evelyn were involved in developing a competitive meat product
show in Wisconsin. Although the first state event attracted only four bacons and five hams, the
1993 WAMP Product Show had a record 975 entries in 27 classes. Indeed, their main intent in
helping start a Wisconsin product show was to give processors an opportunity to compare their
products to those of other plants, and to learn and improve their meat products by this
experience. In recognition of this forward thinking, Jim was elected to AAMP’s Cured Meat
Hall of Fame in 1993.

As a recent member of the Wisconsin 4-H Foundation Board, Jim conceived the idea of
conducting a meat product show and auction at the Wisconsin State Fair, to help raise funds for
the 4-H Foundation. This program was initiated in 1991, with 75 products entered into five
product classes that first year. The 1994 auction of the top three products from each class
provided over $17,000 for the Foundation, to be used to support youth programs throughout the
state of Wisconsin. In 1996 the proceeds exceeded $25,000.

Among Wisconsin meat plant operators, Jim and Evelyn are associated with excellence in many
areas. They have been extremely prominent in the leadership of AAMP and WAMP, and
contributed to the strong positions these organizations occupy in the meat industry today. Their
joint credentials make them very worthy recipients.ard of the College of Agricultural
and Life Sciences at the University of Wisconsin, was recognized as Wisconsin Manufacturing
and Commerce’s Man of the Year, received the Distinguished Service Award of the Wisconsin
Farm Bureau, and was elected to the American Poultry Hall of Fame in 1992. In 1988 he was
named “Man of the Year” by Alpha Gamma Rho.