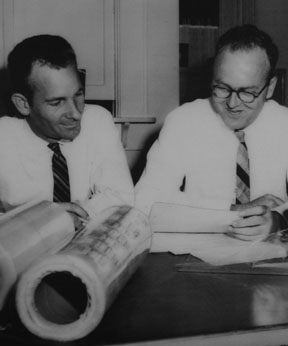 With modest financial help from friends and business associates and the little money they had themselves,
Howard Curler and Robert Woods started a food packaging company, Curwood, in late 1958 in a small,
rented building, which was originally built as an ice house, adjacent to the Wolf River and the railroad tracks in
New London, Wisconsin. Howard’s brother, Marvin Curler, was among the original investors and employees.

Howard Curler was born and raised on a farm in central Wisconsin. He served in the U.S. Army in World War II
and later studied chemical engineering at the University of Wisconsin-Madison where he received a Bachelor
of Science degree in 1948. After graduation he worked in the research department at Marathon Corporation,
which later became a part of American Can.

Robert Woods was born and raised in the oil fields of Oklahoma. He studied mechanical engineering at
Oklahoma A&M and later transferred to Marquette University in Milwaukee where he received a Bachelor of
Science degree in mechanical engineering in 1942. Woods spent the war years developing diesel airplane
engines at Nordberg in Milwaukee. After the war he moved to the Fox River Valley to work for Marathon
Corporation where he developed manufacturing machinery for packaging materials.

Curler and Woods had met and worked together at Marathon Corporation in Neenah beginning in the late
1940’s. Curler worked in chemical research, and Woods in mechanical engineering. At that time, Marathon
was one of only three companies in the country experimenting with extrusion coating on paper, a process
Curler found immensely exciting. In Curler’s mind, the future in food packaging lay in the development of the
flexible polymer extrusion materials themselves – not just as coatings for paper. When Marathon was acquired
by American Can in 1958 and the decision was made for the company to concentrate on paper packaging,
Curler knew that the answer for him was in doing it himself, his way, which meant staring his own flexible
polymer packaging business, and he invited Woods to bring his expertise in manufacturing machinery to the
fledgling enterprise.

This was before the advent of the supermarket as we know it. The most sophisticated food packaging
materials of the day were glass, tin, waxed paper and cellophane. Almost every corner grocery store had a
butcher and all meat, including lunch meat and bacon, was cut to order and wrapped in brown paper and
string. Yet, with his chemical knowledge and business foresight, Curler envisioned the day when flexible
polymer materials could serve as effective, economical replacements for all of these.

Curwood’s first extruders and laminators were home-built and by February 1959, full scale production of
Curwood’s first product, the tough, highly transparent polyethylene film structure that Howard Curler had
developed, was underway. Within a year the company had outgrown its first building and rented another,
larger facility in which to produce blown film tubing as well as to expand its lines of coated and laminated
films.

Curwood’s Curpolene® Film, developed by Howard Curler in 1960, soon revolutionized cheese packaging
and Kraft Foods became Curwood’s largest customer. With the introduction of vacuum packaging for cheese
and meat, Curwood products were becoming the packaging of choice for a growing list of perishable food
products and dramatic expansion was necessary to keep up with demand.

Although the business was still small, it had become a desirable acquisition target. To help facilitate needed
expansion, in 1965, Curler and Woods sold Curwood to the Bemis Company of Minneapolis. The Bemis
Company had been founded in 1858 – exactly 100 years before Curwood – as one of the nation’s first
“packaging” companies. Bemis produced the first commercially sewn, color printed textile bags sold in the
United States and was a well-known and well-respected company seeking to expand its packaging-related
holdings. Bemis was favorably impressed by Curwood’s people, products and plans.

The acquisition by Bemis enabled Curwood to expand and, at the same time, enhanced Bemis’ presence
and influence as a major innovator of packaging materials. Within a few years, Howard Curler would become
President of Bemis, and through a series of strategic acquisitions and new product introductions, make
Bemis one of the top plastic film extruders in North America.

In addition to Curplene® Films, revolutionary products which would open new markets for Curwood included
Curlon® Films for meat packaging. The acquisition of FlexVac® Packaging Machinery for meats – including
bacon, franks and lunch meat – also helped Curwood in its effort to revolutionize packaging materials and
processes for meat. FlexVac® and Royal Vac® are Curwood’s two popular meat packaging machinery
brands, and more franks, lunch meat and bacon are packaged in Curwood film products today than in films
from any other packaging materials supplier.

As Curler’s vision was realized and it was evident that polymer-based films were the packaging of the future,
competition intensified and Curwood continued its capital expansions and new product and process
development activities. Committed to on-going research and leading edge technology, the firm continued to
develop new products like Curwood’s patented EZ-Peel® Films. These were the very first films for food
packaging that could be run on vacuum packaging equipment, maintain a hermetic seal, and be opened with
the mere force of the fingertips. This convenience feature, which could be “engineered into” Curwood films,
eliminated the need for knives or scissors to open packages and continues to be particularly significant in
the meat industry for lunch meat and franks.

In addition to cheese and meat, Curwood and its Group Companies produce packaging films for coffee,
candy, sweet and salted snacks, liquid products, personal care and medical products and the list continues
to grow. Manufacturing plants and sales offices are now located across the United States and Canada and in
Europe and South America.

Curler was President of Curwood from its founding in 1958 until 1970 when he became a Bemis Vice
President and Director of the Bemis Packaging Group. In 1972, he was named to the Bemis Board of
Directors. He served as CEO of Bemis from 1978 to 1990. From Curwood’s founding in 1958 until his
retirement, Woods worked as Vice President, President, and CEO of Curwood. Marvin Curler moved to
Wisconsin from Texas to join Curwood at its inception. He followed Woods as President and later served as
Chairman of the Curwood Group until his retirement. Today, Howard’s son, Jeff Curler, is President and CEO
of Bemis, continuing his father’s tradition of innovative polymer based films.