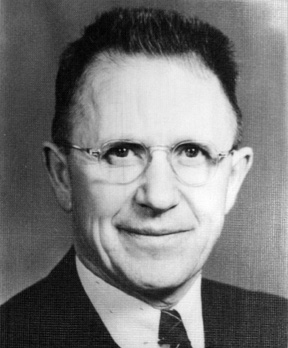 In 1912, the Liebmann brothers purchased the small slaughter business their father initiated in
1887 at Green Bay, Wisconsin. From a humble beginning they brought the Liebmann Packing
Company to a daily slaughter capacity of 900 cattle and 2,500 calves. The brothers formed a
unique team with Herb running the daily operations and Ed doing the marketing. They
pioneered, in Green Bay, the first on-rail moving slaughter process in the United States. They
provided meat for the nation, jobs for people and a competitive market for livestock in the
Midwest.

Edwin and Herbert Liebmann were the sons of Edwin and Mary Liebmann of Green Bay. Ed
was born February 5, 1889 and Herb was born April 9, 1891, both in Preble, Wisconsin.
The history of the company began in 1887 with the senior Liebmann. He went throughout the
countryside by horse and wagon purchasing animals which he then butchered and sold, the
same day, to different meat markets. A daily profit was five dollars. When the brothers took over in
1912, they operated in much the same manner except that they had a three-quarter ton Dodge
truck to canvass for animals.

The company grew, because of their efforts, to reach a very sizeable capacity per day. Liebmann
Packing Company was sold to Packerland Packing in 1970, and Packerland Packing Company
carries on many of its operations on the same premises yet today.
The unique team of Ed and Herb Liebmann, was the epitome of a successful, cooperative
business venture in meat production. It was a common phenomenon for the brothers to start each
day’s activities by initiating plant functions. Then they would disappear into a “back” office and
take out their frustrations and disagreements on each other, usually emerging with agreed-upon
solutions.

In his travels to Canada, Ed once learned of an idea from an Englishman on how to slaughter
cattle using a rail system rather than the traditional “bed” on the slaughterhouse floor method.
He brought the idea to Green Bay where the Liebmann Brothers pioneered the first on-rail
moving slaughtering process in the United States. The initiation and dedication of this new
slaughter line brought industry executives and guests from all over the country. USDA had to be
convinced that the new method was hygienic.

Liebmann Brothers owned or leased their own fleet of refrigerated railroad cars and shipped
much of the product to the East Coast. Selected offal items were exported, being shipped out of
Green Bay and East Coast ports on refrigerated ocean-going vessels. During World War II they
supplied a great deal of beef to the armed forces.

A number of family members joined the company in later years. These included Ed’s son
Leonard and son-in-law “Les” Lesperance and Herb’s sons, Herbert Jr. and Bernard. Each man
operated in their own special area and function.

The brothers were community minded, providing charitable support as well as serving in civic,
religious, educational and hospital organizations; this included a directorship for the Green Bay
Packers football team.

Ed and Herb Liebmann were directly responsible for the growth of a very successful meat
company in Wisconsin, a partnership that lasted for nearly 60 years. Their early business
survived the 1930 depression, and provided many jobs, millions of pounds of beef and veal, and
a continuous market for Wisconsin livestock. The brothers were close friends, fierce
competitors, and strong partners in building and maintaining a successful business during their
90 years in Green Bay. They were constantly trying new ideas that would improve their
products, minimize costs, and ultimately keep their company economically solvent. They
pioneered on-rail slaughter, and today millions of cattle in the United States are slaughtered that
way, because of their foresight.