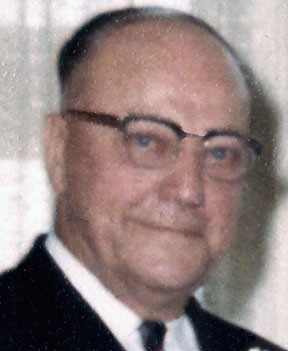 Harvey Rasmussen, along with his son Bud, took over a successful Chicago business fixing equipment,
including smoke houses, and developed it into the leading manufacturer of smoke houses.

Harvey Rasmussen, one of five children born to European immigrants Hans and Bertha Rasmussen,
started his life at Forest Park, IL in 1906. In his youth Harvey was trained as a sheet metal craftsman and
during World War II he was a construction supervisor at the Chrysler Automotive Plant in Chicago, building
B-29 Air Force bomber engines. After the war, he first worked along with another craftsman, Leo Spiehs, for
the Julian Engineering Company building smoke houses for the meat industry. Spiehs and Rasmussen
left the company to form their own smoke house business. The business grew rapidly.

In the meantime, “Al” and “Karl” Cannatero owned a Chicago business fixing all sorts of equipment,
including smoke houses. The company was appropriately named ALKAR Engineering. In the 1950s
Harvey and son Bud became partners with the Cannatero brothers in Chicago, but Al died and in 1960 and
ALKAR was purchased by the Rasmussen family. Because the company was expanding by 35% annually,
Harvey deemed it necessary to move to a larger facility. Bud, having a cottage on Lake Wisconsin, spotted
a “for sale” sign on a building in Lodi, WI and the family purchased it in 1962. The new company “ALKAR-
RASMUSSEN”, has had its roots in Lodi ever since and currently is one of the major manufacturers of
smoke houses internationally. Harvey served as the company’s president until his death in 1975 at the
age of 69.

Processed meats have been and currently are some of the meat industry’s major products. One of the
important processes contributing to this popularity is the addition of smoke during processing. Smoke
serves as a flavor and aroma additive for cured hams, bacon, wieners, cooked luncheon meats, and
specialty items such as beef jerky. Most major and small meat companies throughout the world depend on
manufacturing value-added processed meat products and they depend on companies such as ALKAR-
RASMUSSEN to provide the desirable smoke houses in which to complete the smoking process. Through
the efforts of Harvey Rasmussen, his engineers, and the other company employees, the organization has
become internationally known, manufacturing one of the most reliable smoke houses on the market. They
do business in all 50 U.S. states and throughout the world.

Harvey and his family started a company that is now the world leader in smoke house manufacture. This
Lodi-based company has provided permanent employment for more than 280 families and is the only all-
season major business in the Lodi community. It provides a large tax base on the local and state levels of
government. Furthermore, through Harvey’s efforts, the company has developed a number of patents
related to more efficient smoke production and ventilation, and has been on the “cutting edge” of improving
the environment around meat processing companies. This has been accomplished by building equipment
that minimizes the production of undesirable volatile compounds which would otherwise escape into the
atmosphere.

Today the company is known as Alkar-Rapid Pak Sanimatic, and it has an expanded product line that
includes batch ovens, continuous smoking/cooking systems, brine chillers, drying chambers, automatic
cleaning systems and packaging equipment. Their most recent patented innovation is a flash
pasteurization system incorporated into packaging equipment, to insure the elimination of Listeria
monocytogenes from ready-to-eat products such as hot dogs and deli meats as they are packaged.

In addition, the company has supported meat science education programs at many land-grant universities,
including supplying a modern smoke house to the University of Wisconsin Meat Science Laboratory at
cost, providing the University with considerable savings. Harvey Rasmussen was a pioneer in the
manufacture of equipment to generate smoke and cook product for the meat industry world-wide and grew
a company in Wisconsin that has an international reputation for high quality equipment, concerns for a
pollution-free environment, and enhancement of the safety of ready-to-eat meat and poultry products. He is
most deserving of induction into the Wisconsin Meat Industry Hall of Fame.

In 1923 Harvey Rasmussen married Myrtle O’Kane, and in 1973 they along with their children Lorraine,
Delores and Bud, celebrated their Golden Wedding Anniversary. Harvey served as an officer of the national
organization ‘Meat Industry and Manufacturing Association’, and was an active member in the American
Meat Institute and the National Independent Meat Processors Association. He was a member of the
Knights of Columbus and the St. Patrick’s Catholic Church of Lodi.