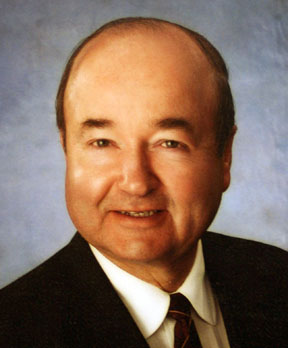 Gary Bernegger was born and raised in New London, Wis., and has literally spent a lifetime in
the meat business.

While she was pregnant with him, Bernegger’s mother Armella worked at the family’s Quality
Packing Company, and as a child he often brought his dad’s lunch to the plant on busy days.
While a student at Marquette University, he arranged his class schedule so he could walk to the
Milwaukee stockyards to buy cattle and hogs to send back to his family’s business in New
London. Bernegger likes to note that the education he got from the “sharpies” down in the pens
was as valuable as the formal education he received at Marquette.

Bernegger joined his parents’ business after graduating from college, and was named president
when they sold the business to Consolidated Foods (Sara Lee) in 1972. Bernegger served as
president of the company, renamed Hillshire Farm, until 1984. After serving as a corporate vice
president of Sara Lee Meat Group in Memphis, Tenn., he returned to New London in 1988 to
direct the merger of Hillshire Farm with Kahns. He then served as a consultant to Sara Lee
Corporate Business Development. Bernegger currently runs his own consulting business and
serves on the boards of several Wisconsin organizations.

Hillshire Farm, which now sells processed meats throughout the country, has been a major factor
in the local and state economy. The company has been a strong supporter of education and the
arts in the Fox Valley area, and very supportive of programs at the UW-Madison. Hillshire Farm
grew explosively during Bernegger’s tenure as president, expanding from 200 to more than 1,500
employees and from $18 million to more than $200 million in sales. For many years Hillshire
Farm was a major buyer of butcher hogs and sows in Wisconsin.

Bernegger’s parents, Fritz and Armella, founded Hillshire Farm, and were previously inducted
into the Wisconsin Meat Industry Hall of Fame. Gary Bernegger and his wife, Joan, have three
sons, Mark, Paul and Peter, and one daughter, Cathy. They live in New London.