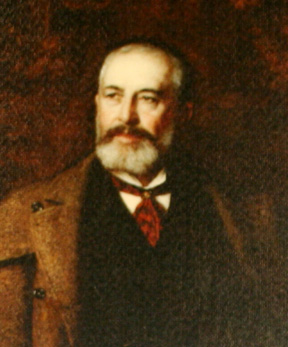 The Layton name is synonymous with the earliest days of the meat industry in Milwaukee. Not
only the economy, but also the social progress of the city benefited from the business leadership
and generosity of Frederick Layton. He was born to John and Mary Layton in 1827 at
Cambridgeshire, England. John owned a small butcher shop where Frederick joined him at age
14 to learn the business.

Deciding to try their luck in the “Land of Opportunity”, John and Frederick sailed for the United
States in 1842 (Mary came after enough money had been saved). They found that farming in
Racine County brought in so little money that in 1845 they left it to open Layton and Son, a
retail meat market in Milwaukee. They supplied hotels and boarding houses with beef and pork
(at $6 to $10 a barrel). After Mary had joined the family and the business had begun to prosper,
he met and married Elizabeth Hayman of Oak Creek, Wisconsin. Elizabeth became his life-long
partner in traveling and in serving the city of Milwaukee in numerous charitable activities. They
had no children.

The company was in partnership with John Plankinton (a 1995 inductee into the Hall of Fame)
for a time and in 1863 Layton & Co. was established, coinciding with the opening of their new
slaughter and packing house. The firm’s operations included slaughtering, cutting, packing,
dry-salting, smoking hams and bacon, and rendering lard. They also processed blood and other
offal for fertilizer. The company employed about 140 people, and its products were noted for
high quality. Frederick Layton took over the company when his father died in 1875, and sold his
interest in 1901, at which time the business was renamed Layton Company.

Layton had become a wealthy man during his meat packing years, frequently traveling to Europe
to market his meat products as well as to visit art museums and purchase paintings. However, he
and Elizabeth stayed in the background and lived unpretentiously, being enthusiastic gardeners,
collectors of art and very generous benefactors. His entire fortune was returned to the city of
Milwaukee in the form of then endowed Layton Art Gallery, and for many priceless oil paintings
and sculptures, some of which are currently displayed along with his portrait in the Layton
section of the Milwaukee Art Museum. A photograph of this portrait is now exhibited in this
text and in the Hall of Fame. In 1982 a book entitled “For the Good of Others: The Life and
Times of Frederick Layton” was authored by May Murphy Thibaudeau of South Milwaukee,
Wisconsin, and now serves as a marvelous story of an immigrant that came to America, helped
pioneer Wisconsin’s meat industry, provided so much for so many, and then died in 1919.