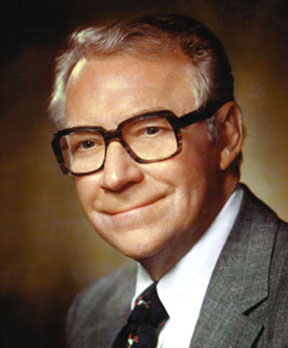 Frederick D. Usinger was born May 20, 1917 in Milwaukee, is married to Lois D. Usinger, and they have five
children — Karen, Barbara, Heidi, Debra and Fritz.

Frederick D. Usinger, grandson of the founder of Fred Usinger, Inc., is a rare individual. He has devotedhimself
to the growth and prosperity of the sausage-making business his grandfather founded in 1880. At the same
time, he has also seen to it that the reputation of the company (America’s premier sausage-maker) would serve
to enhance the reputation of his hometown, Milwaukee, as well as the State of Wisconsin. This has been
accomplished, because of Frederick’s commitment to continue to make the best sausage that can be made —
adhering to the tradition of quality established by his grandfather and never deviating from that ideal.

He began working at the company on a part-time basis during the summer months in 1933, at the age of 16.
He started, literally, at the bottom — washing floors, moving meat, cleaning casings, hanging sausages in the
smokehouse, and, later, trimming, stuffing and cooking, until, eventually, he was ready to handle the all-
important operation of sausage mixing. Frederick began this way purposely, so that he would personally learn
every step of the process of sausage making and would be able to oversee the entire operation in later years. At
age 24, Frederick became plant superintendent; five years later, vice president. He also, for a time, “kept the
books”, and was actively involved in the office management of the company. In 1953, when he became
president, he was also named a “Meister Wurstmacher” (Master Sausage-Maker). He still takes special pride in
this title. While he was president, he continued to buy the spices and natural casings that go into making
sausage.

After assuming the presidency, one of Frederick’s first actions was to organize Usinger’s packaging — even to
design some of the shipping cartons. It was his idea to make use of the company’s now famous “sausage-
making elves” on the labels, cartons, letterheads and advertising materials. The first “elf” became a registered
trademark in 1956.

In 1954, Frederick originated the idea of sausage gift assortments — long before other food marketers entered
the field. From a humble beginning of just a few hundred boxes, the company’s Christmas gift business has
multiplied many times over and has become an integral part of its total volume. The gift box business is now,
also, year ’round. These gift assortments have served to build priceless word-of-mouth advertising — people
who send them and people who receive them talk about them enthusiastically!

Over the years, since Frederick’s assumption of the company presidency, the firm’s annual production of
sausage has more than doubled. More importantly, the superior quality of the product line has been maintained
and is acknowledged as the best by both meat-industry peers and consumers. Feature articles in such
prestigious magazines as The Saturday Evening Post, National Geographic and Esquire have brought national
attention as have articles which have appeared in newspapers such as “The New York Times”, “The Chicago
Tribune” and “The Los Angeles Times”.

He made sure that his son, Fritz, learned the business “from the bottom up”, as he did — working in the plant
summer after summer. After Fritz graduated from the University of Wisconsin- Madison in May 1980 with a B.S.
degree in Agriculture, majoring in Meat & Animal Science, he still worked in the manufacturing plant. In June of
1988, Frederick handed the presidency of the company to Fritz and semi-retired with the title of Chairman of the
Board. Frederick’s youngest daughter, Debra, is also active in the firm, as Director of Retail Operations and
Corporate Services. The other three daughters, while not currently active in the business, all worked in the retail
store or office at one time or another.

Frederick Usinger remains a strong influence within the corporation, and his advice, suggestions and counsel are
well respected. Because of him, Usinger’s sausage is acknowledged and recognized throughout the country and
the meat industry as a premier product — one which stands for unequaled excellence. The company continues to
prosper, providing steady employment for some 140 people, and looks toward the future with a successful eye
based on family pride, tradition and uncompromising quality.