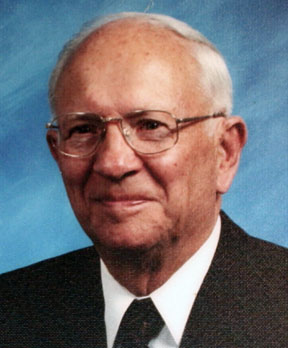 Ernest J. Briskey has been an internationally recognized scientific pioneer in the meat industry.
He studied the fundamental physiological and biochemical changes in muscle tissue during it’s
postmortem transformation to meat and how they related to the development of pale, soft,
exudative (PSE) and dark, firm, dry (DFD) muscle tissue, as well as conditions during the onset
of rigor mortis. This lead to the development of pork quality standards in Wisconsin. Briskey is
credited with bringing basic scientific approaches to meat science research and designating
“Muscle Biology” as an accepted component of the “Meat Science” career discipline.

Briskey was born in 1931 and grew up on a dairy farm, and attended the Hillsboro public
schools. He served as vice president for the Future Farmers of America organization in
Wisconsin and received the American Farmers degree from the national organization. As an
undergraduate, Briskey studied Animal Science, earning a B.S. degree from the University of
Wisconsin-Madison in 1952. In 1951, he joined the University Meat Judging Team, which led
him to pursue meat quality research later in life.

Briskey received his master’s degree in Meat Science/Biology from Ohio State University after
serving as an officer in the Korean War. 1955 he married Majorie Swanson of Madison,
Wisconsin, and they are the parents of Kemble, Carla and Paul. He returned to the University of
Wisconsin to pursue his Ph.D. in Biochemistry and Muscle Biology. In 1958 he joined the
University’s Meat Science faculty and for the next 13 years he worked in a team effort to build
the University’s Meat Science and Muscle Biology program into one of international
significance.

His research revealed the importance of the postmortem transition of muscle to meat and,
consequently, the handling of live animals prior to slaughter, particularly for those animals
which were stress susceptible (known as porcine stress syndrome or PSS). The terms for
undesirable pork quality, PSE and DFD, were coined by Briskey early in his career and are still
used internationally by meat researchers and the pork industry. His research also led to the
disassembly of the myofibrils of skeletal muscle to include basic work on isolated proteins.

Besides his pioneering research he helped add two new courses to the meat science/muscle
biology program and coached some of the University’s most successful meat judging teams.
Briskey helped the University of Wisconsin’s Department of Meat and Animal Science double
the size of its Meat Science/Muscle Biology facility and Muscle Biology staff. Through his team
effort the program attracted many graduate students, post-doctorates and visiting scientists from
around the world.

During his tenure in Wisconsin, he published many scientific papers, and chaired the
development of two international symposia on “the Physiology and Biochemistry of Muscle as a
Food” held at the University of Wisconsin. While at the University, Briskey served as editor of
the Journal of Food Science, and helped charter the American Meat Science Association.

Before leaving the University of Wisconsin, he was named the H.L. Russell Distinguished
Professor of Agricultural and Life Sciences. When he left the University in 1970 he became vice
president of basic research in the Campbell Institute for Food Research and then became
corporate vice president of technical administration for the Campbell Soup Company on a
worldwide basis. Later he became Dean of Agriculture at Oregon State University. Before
retirement in 1998, he served as Science Advisor to the American Ambassador in Thailand
and as Science Advisor to the Kuwait Institute for Scientific Research.