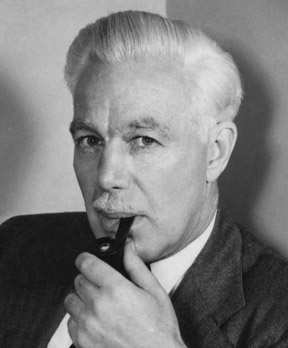 E.C. (Ted) Sloan’s 20 years of innovative work in the Research Department of Oscar Mayer and
Company in Madison, Wisconsin, led to many important advancements for the company and for
the nation’s processed meat industry. The two most significant accomplishments of that era
were the development of transparent, flexible, oxygen impermeable meat packaging systems,
and the world’s first continuous wiener process. From their early inception in the mid-1950’s,
today over 75% of the wieners manufactured in the U.S. are manufactured on continuous
sausage processing units, and virtually all processed meat sold at retail is packaged in attractive,
clear plastic film that preserves product quality for months.

Ted Sloan was born in Salem, Massachusetts, and graduated from Wesleyan University in
Middletown, Connecticut. After completing his education he served two years as an Army flyer,
and several years working for American and British oil companies in Mexico and other
locations. At that point Sloan became involved with plastics. He operated his own plastics
design business in the early 1930’s, followed by seven years with the Hawley Products Company
of St. Charles, Illinois. In 1940 he joined Oscar Mayer and Company in Chicago, but in 1942
took a war-related leave of absence to take charge of plastics research for Navy aircraft with the
Rudolph Wurlitzer Company of DeKalb, Illinois. Following the war he returned to Oscar Mayer
and Company in Madison, retiring as Vice President and Director of Research in 1961.

With the support of Mr. Gottfried O. Mayer, Ted Sloan created a corporate research department
in Madison. He hired a staff of individuals with scientific skill, a strong work ethic and an
ability to think “outside of the box”. From the very beginning, Sloan’s research and research
management efforts began to pay dividends. Sloan himself holds the patent on the machine that
applied brand identification in the form of a printed paper band to each Oscar Mayer wiener.
This moved wieners from being a generic commodity to a brand-labeled product, taking the
company name into every kitchen.

One day in 1958, E.C. Sloan gathered members of the Oscar Mayer Research department into
his office to discuss a new idea. The challenge was to produce more Oscar Mayer wieners,
without building any new plants. The only way to do that was to make more wieners in less time in
existing plants. At that time Oscar Mayer wieners were made in consecutive 500 pound batches,
each taking 24 hours to produce. It was a lengthy, labor-intensive process with many
opportunities for error.

Sloan challenged his team to come up with a process to produce wieners – beginning to end – in
less than an hour. The group envisioned a continuous process, but then realized that it would
take a layout the length of a football field to accommodate all the steps – grinding, mixing,
chopping, stuffing, linking, smoking, cooking, cooling, peeling and packaging. However,
someone observed that space goes in all directions. Why couldn’t the product move through a
path that was like a roller coaster, going up and down through different zones, allowing enough
space and time for each step in the process, and making the most of space in the plant.

After encountering and solving many problems the first wiener tunnel (nicknamed the “hot dog
highway”) was ready for its initial run in 1960. The continuous wiener process was actually a
combination of mechanical components and processing innovations. The system was designed
to take in raw meat and other ingredients at one end, and produce vacuum-packaged, consumer
ready wieners at the other end less than an hour later. The process duplicated all the traditional
wiener-making steps in one-tenth of the time, and produced more consistent wieners with a much
longer shelf life. The entire process is automated and the wieners untouched by human hands.

The system captures fresh wiener flavor by sealing them in polymer film just minutes after
processing. The use of anaerobic flexible packaging material that extend the shelf life of
processed meat products over 10 fold, were evolving at the time of the project initiation.
Preformed Saran and Saran coated polymers were already in use at Oscar Mayer on some
sausage and sliced luncheon meats. The extrusion of an amorphous, anaerobic film right on the
packaging line was a key feature that was incorporated into the continuous wiener-making
process.

This pioneering work significantly altered the processed meat industry worldwide. Because of
the magnitude and complexity of the process, Oscar Mayer had an industry exclusive for nearly
two decades. As word of the economy of production, high product consistency and long shelf
life circulated, other companies developed their own continuous sausage manufacturing systems.
Today continuous systems produce three-quarters of the nation’s wieners.

Because of the magnitude of this project and the significance of the dozens of individual
components and innovations incorporated into it, no single individual can be identified as the
developer, but Sloan was clearly the leader. Team members came from the departments of
research, product control, packaging, and machine development, all based at the company’s
Madison headquarters. More than 50 U.S. patents, by 17 individuals, on elements of the
continuous process and anaerobic packaging were obtained by Oscar Mayer engineers and
technologists between 1957 and 1963. Six members of the team perished in an airplane crash in
1959 while on a trip to identify system components.

The first two continuous wiener process systems ran at the Oscar Mayer plant in Madison for
nearly 40 years. They were retired in 2000 to make way for a new-generation system, built on
the original, Sloan-inspired principles and manufactured by Alkar, another Wisconsin company.