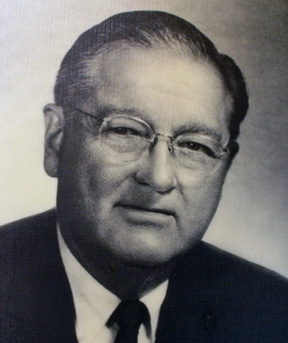 Ed Jones played a key role in the development of Jones Dairy Farm, a pork processing company
famous for its products. He was responsible for continuous growth and expansion of the
operation. Initiation of an aggressive quality control program and national advertising exposure
led to distribution in supermarkets and retail outlets in all fifty states and some foreign countries.
More recently, products have been made for direct sale to food service operations. He was
concerned about education and about his industry, and he devoted supreme effort to leadership
and establishing new programs therein.

Jones Dairy Farm has long been an important industry in Wisconsin. Additionally, it has been
important to the agricultural segment and especially to the swine industry. The business required
hogs for slaughter and increased competition for them in Southern Wisconsin. In the 1950’s,
when the industry recognized the growing demand for meatier hogs, Ed Jones played an
important role in helping to educate producers about differences among hogs being produced for
slaughter. He provided animals for University of Wisconsin Extension for live and carcass
evaluation clinics, and for many years he opened plant facilities for conducting pork carcass
contests. He shared the responsibility for the development of “meat type” hogs in Wisconsin. He
was a continuous and strong supporter of the University of Wisconsin, making facilities
available for research and personnel available to assist the researchers. He assisted in many
ways the education of students, farmers, vocational agriculture instructors and agricultural
county agents. As further evidence of his concern about the livestock and meat industry of
Wisconsin, he was one of the industry leaders who saw the need to establish the Wisconsin
Livestock and Meat Council in 1957. He served as director and as president of the organization
from 1963 to 1981. During his tenure as president, the organization developed programs for
consumer education, promotion, research and information. He was responsible for developing a
scholarship program for college students majoring in the Animal Sciences curriculum of the
University of Wisconsin. To date more than 200 students have been recipients.

He was a director of the American Meat Institute (AMI) for 33 years, served as treasurer from
1964 to 1968 and as chairman from 1968 to 1971. His service has been recognized by many and
various awards. In his honor AMI now annually recognizes a deserving industry company with
the “Edward C. Jones Community Service Award”. Ed Jones was a leader in the meat and
livestock industry, and guided his company through change and growth.