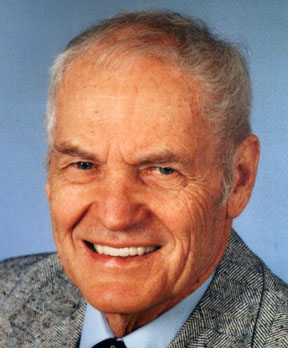 Dr. Edward Baker was the person who led the development and start-up of Wisconsin’s state
meat inspection program. It all began in 1965 when the Wisconsin legislature mandated state
meat inspection for all non-federal processing plants which were selling meat within the state.
Dr. Edward Baker was appointed to be the first administrator of that program. The state plans
were soon drastically altered by the passage of the Federal Wholesome Meat Act in 1967,
making all state meat inspection programs a cooperative venture with the USDA. It was quickly
learned that two little words “equal to” in the federal law carried a big punch and there would be
little variance from federal standards. Although the federal law had authority over state
programs, the impact of thousands of small plants being thrust under inspection at one time was
staggering. Neither the state or federal government was adequately prepared for it.

In the beginning, most of Wisconsin’s 500 meat plant owners were fiercely independent small
businessmen, who operated locally and had never been regulated, and didn’t like being
regulated. In those early days Ed recalled going to a meeting in a small central Wisconsin town
to discuss a meat plant problem, supposedly with a small group of concerned citizens. As he and
a colleague drove into town they wondered about what brought out the great number of cars
parked on the street. They soon learned that the people were there to vent their wrath upon the
“bureaucrat from Madison.” After a couple hours of shouting and name calling, Ed was happy
to leave the meeting with his neck intact. Fortunately, cooler heads prevailed at most of these
early meetings and the officers of the Wisconsin Association of Meat Processors would step in
when things seemed to be getting out of control.

One of our big early inspection challenges was to hire an inspection staff. Except for three or
four men who had worked in federal inspection, there was no pool of experience to draw from.
In the fall of 1967, 60 new employees were hired in one weeks time to be trained and ready for
inspection by January 1, 1968. Two or three of them quit after seeing training films of slaughter.
Blood and guts made them ill. This lack of experienced employees was a handicap in
communicating the program to the meat plant’s owners and employees.

From the meat plant’s standpoint, facility requirements was a gigantic obstacle. The “equal to”
provision required compliance with federal construction standards. Some relief was temporarily
gained through the guidelines for small existing plants but sooner or later most plants had to
conduct major remodeling programs. For several years, the state program annually approved 50
to 75 major construction projects.

Some of the things that may seem comical today were very serious issues in the early days.
There was so much confusion over retail and custom exemptions that neither inspector or plant
owner understood them. It took many trips to Washington, including members of the
processors’ association, to help clarify the rules. The poultry exemption had so many criteria
that hardly anyone could explain it.

Budgets for inspection were always interesting. It seemed like one year there was a cut back in
state funds, and the next year there was a cut back in the federal program. One year the governor
line vetoed the entire program out of the budget. Hours and days were spent putting together
materials supporting state inspection. Finally, largely through the efforts of the Wisconsin Meat
Processors Association, the legislature was convinced to override the governor’s veto.

Much of the success of the Wisconsin State Meat Inspection program is due to a dedicated
inspection staff and cooperative leadership from the meat industry. The USDA throughout the
years provided any assistance that was requested from their training center. The University of
Wisconsin meat science staff provided additional training and were always available for
consultation and help when problems arose. It was gratifying to see the many improvements
made in plant facilities. Wisconsin plants produce a great variety of fine products and it is a
shame that they cannot be marketed in interstate commerce.

Dr. Baker is being recognized for the outstanding leadership he provided in planning, organizing
and implementing Wisconsin’s State Meat Inspection program. Dr. Baker served as the
administrator of the Meat Inspection division from 1967 to 1984. The program he created has
grown to be respected as one of the finest programs in the country.

Dr. Baker obtained his doctor of veterinary medicine degree from Kansas State University. He
and his wife Patricia have two daughters, Sally (Baught) and Jenny (Linley), and four
grandchildren.