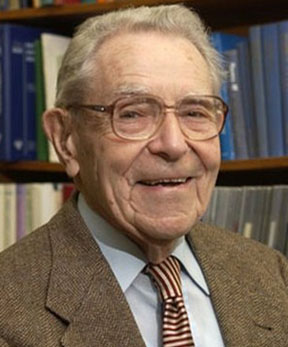 Meat Industry Hall of Fame inductee Ed Traisman earned his B.S. degree in chemistry from the
University of Illinois in 1936. After working as a sugar chemist with American-Maize Products
of Hammond, Indiana for 10 years, he joined Kraft Foods as a cheese products researcher. He
served as a research manager at Kraft for nine years, until he learned about a new system of fast
foods distribution — McDonalds.

In 1957 as Ed drove to and from his work at Kraft, he noticed a new drive-in restaurant in Des
Plaines, called McDonalds. He could see lines of people waiting for service almost every time
he passed. One day he stopped in to learn more about the restaurant. All employees seemed
fully occupied, except for a middle-aged man sweeping the floor in the food preparation area.
This man turned out to be Ray Kroc, and the ensuing discussion he had with the founder of this
restaurant changed the course of Traisman’s life. Ray Kroc was a great salesman, and by the
time Ed left the store, he was 90% certain he wanted to buy a franchise, but he wasn’t sure where
he’d find the money. His wife was all for taking the plunge, and said she’d find a job if
necessary to feed their small children. In 1958 Traisman brought the first McDonald’s franchise
to Madison. He worked long hours improving his store, and was so successful that over the next
13 years he acquired four more McDonalds franchises in Madison and remained a technical
consultant to the parent company. He strongly believed in McDonald’s basic concept of
distributing safe, sanitary and nutritious food that consumers could obtain quickly at an
affordable price, and that would be uniform in quality.

Traisman’s science background and business skills contributed significantly to the company’s
success, and many of the innovations he introduced were adopted nationwide. He researched
and developed a process to freeze partially-cooked french-fried potatoes, thus providing a
uniformly high-quality product throughout the year. In Madison, he established the first “sit down”
McDonalds restaurant in the nation. He was the first franchise owner to recognize and
encourage employment of women, and the first to hire mothers on a part-time basis while their
children were in school.

In 1975 Traisman became the Senior Research Program Manager for the Food Research Institute
(Department of Food Microbiology and Toxicology) at the UW-Madison. He was instrumental
in helping fund FRI projects dealing with additives and contamination of meat products. One
project showed that nitrite in cured meats was almost entirely modified into non-suspect
compounds, and established nitrite’s crucial role in controlling botulism in temperature-abused
cured meats. In 1987 he helped initiate research on E. coli 0157:H7, which was then a little known
pathogen, but already implicated in outbreaks of food-borne illness from ground beef.
Following his semi-retirement in 1989, he has continued to edit the FRI’s quarterly research
report.

Ed Traisman has been married to Dorothy for 41 years. He has five children from his two
marriages (Claudia, Barbara, Steven, Jennifer and Lisa), seven grandchildren and two great
grandchildren. Ed Traisman is being honored for his significant role in Wisconsin’s meat
industry, not only as a pioneer in retailing fast-food meat products, but also as one playing
instrumental roles in meat safety and education.