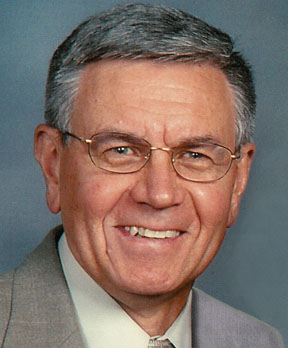 In November, 2005, the Wisconsin meat industry gathered to celebrate this honoree’s retirement. Today,
we are very proud to induct him into the Meat Industry Hall of Fame and only regret that we must do so
posthumously. It is a difficult task to list his impressive array of achievements without his presence.

Although he was never officially dubbed “Mr. Meat Industry”, Dennis R. Buege was known throughout the
industry as the “meat science guy”. A title he earned time and again during his more than 35 years of
service to Wisconsin meat processors and producers. Dennis was born and raised in Juneau, WI. He
attended the University of Wisconsin – Madison and received a Bachelor of Science in Meat and Animal
Science in 1967. He earned his Masters Degree from Cornell University and following a brief stint in the
U.S. Army Veterinary Food Inspection Corps he returned to Madison to obtain his Ph.D. in Meat Science.

Dennis ventured into private industry, naturally in the meat business, when he took a position with the
research and development team at George A. Hormel and Company. His passion for teaching and
fulfilling the Wisconsin Idea brought him back to the University of Wisconsin – Madison once again when
he returned to become the UW Extension Meat Specialist in 1977. He became a full professor in 1987 and
worked at the UW until he retired in 2005.

Dr. Buege enjoyed a long and distinguished career at the UW but he always stayed involved in the industry
via a wide variety of extension and outreach opportunities. His focus was consistently on educating the
consumer and the producer on meat safety and handling practices for meat products. His research
centered on meat safety, nutritional composition of meat products and improved processing technology.
He worked closely with state and national agencies to establish guidelines for nutritional labeling of meat
and poultry products.

Meat safety was foremost in Dennis’ educational efforts and when the meat industry underwent the
enormous transition to HACCP philosophy Buege led the way; establishing training for meat plant
managers and assisting them in developing their own HACCP plans. He did extensive research on jerky
production and helped establish national standards for safe jerky production.

Throughout his professional career Dennis was active in the American Meat Science Association. He
served on numerous AMSA committees and was its’ president in 2005/2006.He also chaired the
Extension Meat Industry Committee and the Meat Industry Research Conference.

Dennis served as an advisor to the Wisconsin Association of Meat Processors for 28 years and was
instrumental in their convention program; planning and executing America’s largest cured meats show
every one of those years. The Wisconsin Association of Meat Processors honored Buege with their
Distinguished Service Award and designated their annual Best of Show award the “Dennis R. Buege
Award”. At his retirement, WAMP established an endowment to a new scholarship/assistantship program
at the UW Foundation in Dennis’ name.

One of Dennis’ greatest joys was working with youth. He was constantly mentoring and advising in a
positive way. He worked tirelessly setting up meat evaluation contests and worked closely with FFA and 4-
H youth. Dennis was the impetus behind the annual 4-H Processed Meats Auction to benefit 4-H youth at
the Wisconsin State Fair. He regularly served as a technical resource in the Wisconsin Livestock and Meat
Council meat promotion booth. He advised and supported all species through his work on the WLMC in
promoting safe meat handling and the nutritional benefits of meat consumption.

Dennis was considered a national resource for information on the nutritional composition of fresh and
processed meats. He also made numerous trips abroad to share his knowledge of meat processing with
small meat processors in developing countries. His legacy was his special brand of networking. He
managed to make everyone who worked with him feel respected and he brought all views to the table in an
effort to ensure the greatest benefits for each segment of the industry.

Dennis’ contributions to the meat industry were significant and far-reaching. His support of the smaller
meat processors was immense. His help with HACCP standards created a huge benefit for all Wisconsin
meat processors and meat producers throughout the nation. The alumnae from his sausage and
processed meat schools have won recognition nationally and internationally. Thomas Powell, Executive
Director of the American Meat Science Association summed it up, “Dennis was a person of many talents
who made multiple contributions to his family, church, community and professional organizations. He was
a man of deep faith and conviction in the things of life that matter. He knew how to treat his fellow man and
was respectful of other’s views and opinions”.

Dennis met the love of his life, Catherine Hughes in zoology 101 at the UW. They married in 1966 and
enjoyed 40 happy years together. They have two daughters, Beth and Amy who wrote a special poem for
Dennis’ retirement party “Its Been Different With a Meat Science Dad”. They summed up Dennis’ career in
one of the final paragraphs; “(But) our Dad always loved his job to the core, Whether in a smoke house,
meat locker or butcher store. He loved it because of all the things he’d do, But mostly because he worked
with people like you!”

Dennis Buege loved many aspects of his job. He appreciated all the support, friendship and fun the
people he worked with shared with him during his many years of service and he was grateful for those
wonderful relationships. We are pleased to recognize Dr. Dennis R. Buege as he joins the Meat Industry
Hall of Fame.