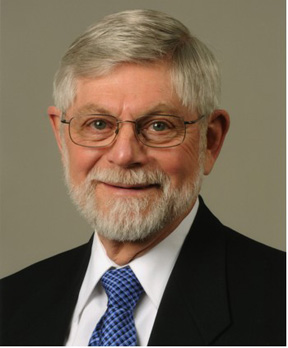 Dean W. Henderson was born at Mason City, Iowa.  He attended primary and secondary school in
Garner, Iowa.  During his youth, he was active in 4-H and FFA, including projects with Hampshire
sheep and Hereford hogs.  He enrolled at Iowa State University, where he received a B.S. degree in
1963.  His interest in meat science was stimulated as a student employee at the university meat
laboratory and in meat judging.  He was a member of the International Livestock Exposition
Championship Meat Judging Team in 1962.  Henderson completed the M.S. degree in 1965 and the
Ph.D. in 1968, both at Iowa State University in meat science.

Dr. Henderson joined the faculty of the Department of Animal Science at the University of Wisconsin-
River Falls in 1968 and launched a 33-year career at a teacher, mentor, academic leader, and meat
industry educator and advisor.  His first assignment was to teach the meat science and introductory
animal science courses.  In 1969, he was responsible for the development of a food science
curriculum, which led to significant growth in student numbers and course offerings in his
department.  This resulted in a change in the name of the department  to Animal and Food Science.
During his career, Dr. Henderson was lead instructor in fourteen different courses, many of which he
personally developed.  He was an outstanding teacher, receiving the College of Agriculture’s Teacher
of the Year Award and its first Distinguished Service Award.  The University of Wisconsin-River Falls
granted him its prestigious Distinguished Teacher Award and he received the American Meat Science
Association Distinguished Teaching Award.  On two different occasions and for a total of thirteen
years, he served as chair of the Department of Animal and Food Science.

Dean Henderson had a special ability to relate to students and young people.  His teaching
effectiveness was based first on his expertise in the subject matter taught.  And it was supported by
his enthusiasm, his personal warmth, his sense of humor and his obvious commitment to his
students.  Many young people were motivated to pursue careers in the meat and animal industries
and in food science through their contacts with him.

For part of his career, Dr. Henderson had an official appointment in Cooperative Extension through
which he developed strong relationships with Wisconsin’s meat processing industry and with high
school students interested in livestock and meat production.  These relationships continued even
after a change in responsibilities removed the extension appointment.  Throughout his career, he
continued to reach out to the agricultural youth of Wisconsin through 4-H and FFA programs.  He
was a regular participant in meat industry workshops and was called upon for advice and consultation
by processors throughout the state.  Indicative of the high regard for his contributions are the
Wisconsin Honorary State FFA Degree and the Wisconsin Meat Processors Association Meritorious
Service Award.

International experience and expertise enriched Dr. Henderson’s teaching on campus and his ability
to serve a diverse clientele.  He consulted and taught in Korea, Belgium, Canada, Russia, Columbia,
and Venezuela.  At the University of Wisconsin-River Falls, he coordinated a FAO International
Training Grant with the Saudi Arabian Ministry of Agriculture and Water.

Dr. Henderson has given dedicated service to the meat industry throughout his career.  He has
chaired the Wisconsin State Meat Inspection Advisory Committee.  From 1986 through 2002, he
served as technical advisor to the American Association of Meat Processors Cured Meat
Championships.  He retired from the University of Wisconsin-River Falls in 2001.  In retirement, he
continues to serve as an industry consultant and judge at cured meat shows at state and national
levels.  He is very active in meat science education, serving as an instructor and organizer of industry
short courses in Iowa and Wisconsin.  Dean and his wife Linda have five children – Paul, Mark,
Kristin, Brad and Lori – and thirteen grandchildren.  They live in Hudson, Wisconsin.

Professor Dean Henderson dedicated his career to the education of young minds, building positive
relationships and influencing students, and serving the livestock and meat industries of Wisconsin .
The Wisconsin Meat Industry Hall of Fame is proud to include him in its membership.