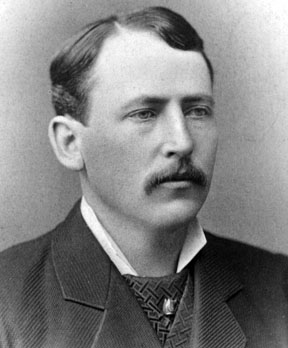 David Drummond came to a frontier town in 1870 and began working in the retail meat
business. He led the business steadily through transitions, and it became the major packing
house of northwestern Wisconsin. A wholesale and retail outlet was associated with it.
Drummond was born in western Ontario, Canada on 27 November, 1849 to parents who had
immigrated from Scotland in 1842. He was also noted as a builder and for his real estate interest
in Eau Claire.

The Eau Claire location was quite strategic. It is situated on the Chippewa river and basically
controls not only the surrounding area but also all of northwestern Wisconsin as a market. The
beginning of his meat packing enterprise coincided with the growing demand for meat by the
important lumber camps and related businesses in the area. As agriculture later became more
prevalent, the packing business provided an important market for livestock produced in the area.
The Drummond Packing Company served the area from the early lumber camp days through
World War II.

David Drummond came to Eau Claire in 1870 and began working immediately in the retail meat
business. In 1873 he went into partnership with a Mr. Brooks to begin a meat packing business
which was known as Brooks and Drummond. Brooks died in 1876 and Drummond carried on
with the business by himself. Brothers John Drummond and Duncan Drummond purchased an
interest in the business in 1881 and it then became known as Drummond Brothers. It was
incorporated in 1893 as Drummond Packing Company with a capital of $125,000.

By 1927 the abattoir was handling 2,000 hogs per week, and Drummond Packing Company
employed about 15 people. Over 10,000,000 pounds of product was sold annually. Arbutus
Ham and Arbutus Bacon were branded products which became well-known. Salt pork and many
varieties of sausage were also manufactured. Product was sold mainly in the area and north to
Lake Superior.

The plant was located on the North side at the east end of Galloway Street in Eau Claire. A new
canning operation was begun in February 1943. The Drummond Packing Company received an
award from the War Products Administration for converting raw material to quality products. It
was planned at the time that the canning department would be converted to canning for the
domestic market when the government war needs abated. Most of the livestock slaughtered by
the company was raised within 75 miles of Eau Claire and was brought to market largely by
truck. The yearly capacity of the plant was approximately 100,000 hogs, 45,000 calves and
25,000 cattle.