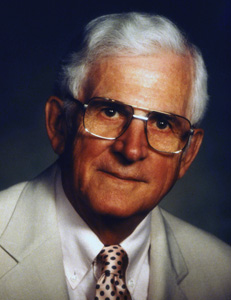 Clarence Knebel was born December 12, 1914 in Iowa County, Wisconsin. He attended Iowa County schools and
graduated from Livingston High School in 1932. After graduation, he moved to Kenosha, Wisconsin, where he
took a job as a truck driver hauling cars from coast to coast.

He was drafted into the Army in 1942, served during World War II in Europe and advanced to the rank of Captain.

After he was discharged from the military, he returned to Belmont, Wisconsin where he purchased a drug store
building and started a locker plant which employed one meat cutter and one meat wrapper. As the business
grew, more services were offered. Many additions were built and many employees were hired. He eventually had
23 full-time employees. Clarence served his customers for 43 years, retiring in 1989.

His dedication to the meat industry led him beyond his community and his plant and into national service for the
meat industry. His activities beyond the management of the processing plant were extensive and indicative of his
leadership qualities.

His outstanding service has been recognized through: Honorary Recognition from University of Wisconsin-
Madison College of Agriculture and Life Sciences; a National Award from American Association of Meat
Processors for outstanding leadership and meritorious service in the Locker and Freezer Provisioning Industry;
the Wisconsin Farm Bureau Award for distinguished service to agriculture; the Outstanding Service and
Leadership Award from Wisconsin Livestock and Breeders Association; the Lafayette County Outstanding
Businessman of the Year Award and National FFA distinguished service award, State FFA Farmer Award and
local FFA Chapter Awards.

He is a devoted husband and father of four daughters. Clarence did not forget the needs of his community. He
has served on the School Board, Church Council, the American Legion, Veterans of Foreign Wars, Lions Club,
and also as the director of a hospital, a nursing home, a bank, and the telephone company.

He created a successful business and played a strong leadership role in the state and national meat industry,
especially in representing the interest of small businesses.