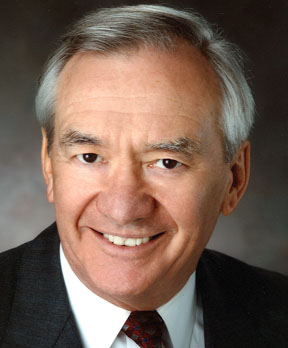 Over the past twenty years, Carl Kuehne has successfully guided American Foods Group, Inc., making it
into one of the largest food processors in the United States. Recently, the company merged with Rosen
Meat Group to create American Foods Group, LLC, with Kuehne at the helm as co-chairman and co-CEO.
Kuehne is also known for implementing innovative programs to raise employee morale, supporting
community programs and holding leadership positions within the meat industry.

Born and raised in Seymour, Wisconsin, Kuehne holds a law degree, as well as a bachelor’s degree in
economics from the University of Wisconsin-Madison. He practiced law for 20 years in Green Bay before
purchasing Consolidated Beef Industries in 1985.

At the time of purchase, Consolidated Beef Industries consisted of two harvesting and processing plants
and netted around $200 million per year. Within a few years, the company—which Kuehne headquartered
in Green Bay and renamed American Foods Group—was netting upwards of $600 million.

When deciding what new value-added products to make, Kuehne listens to his customers. For example,
the company works directly with retail markets to produce case-ready cuts of meat (already wrapped in
trays with plastic film) affixed with the store’s very own price labels.

Over 1,200 employees work at the main beef processing plant in Green Bay, where 1,900 head of cattle are
processed each day and 4 million pounds of ground beef are made every week. In addition to offering
health and life insurance, vacation and holiday pay, 401(k) plans, and an onsite employee cafeteria,
Kuehne developed innovative programs to improve the work experiences of his employees, who hail from
as far away as Laos, Vietnam, Mexico and Poland. The programs—which include English as a Second
Language lessons and classes exploring different cultures—helped reduce the turnover rate of line
workers from 100% to 35% annually. American Foods Group also offers an “Employer Assisted
Homeownership Program” that provides employees with forgivable loans of up to $3,000 for the down
payment and closing costs of a home purchase. Along similar lines, the company has a “Baby Troops
Program” to encourage and help provide pre-natal care to expectant employees.

Kuehne has also taken an active role in the support of numerous community and civic organizations in and
around Green Bay, including the American Red Cross, the American Cancer Society, the Green Bay Boys
and Girls Club and diversity training for local Green Bay businesses. He also sits on the Green Bay
Packers Board of Directors as chairman of the Packers Foundation.

Kuehne is a member of the executive committee and board of directors for the American Meat Institute,
where he also served as chairman in 1996. In 1997, he was recognized by The National Provisioner as the
“Industry Executive of the Year.” He also participates in the U.S. Meat Export Federation and the National
Meat Association.

Kuehne is married to Mary Ellen. They have three children—Kim, Sarah and Scott—and three
grandchildren.

For his astute leadership of American Foods Group and his service to his employees, community and the
meat industry, Carl Kuehne is highly deserving of induction into the Wisconsin Meat Industry Hall of Fame.