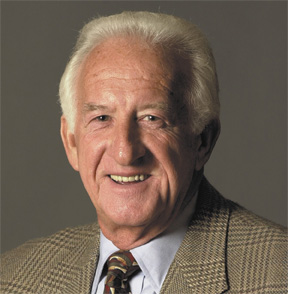 This inductee into the Wisconsin Meat Industry Hall of Fame has never made sausage, never owned or worked in a meat plant, never researched the mysteries of meat tenderness, never taught a course in meat science, and has no patents that improve meat as a food!  Robert George ‘Bob’ Uecker is being honored as a master voice for advertising meat via play-by-play radio announcing of major league baseball. Through his radio broadcasts of Milwaukee Brewers games, he has become a genius at talking about meat by exclaiming to his radio audience the virtues of meat as a healthy, nutritious, and tasty food.  Perhaps no other person in Wisconsin has been more consistent and more effective in supporting the virtues of Wisconsin’s meat Industry.

Bob Uecker was born January 26, 1935 in Milwaukee, Wisconsin.  A natural athlete, baseball became his choice of sports.  After graduating from Milwaukee Technical High School, he signed as a catcher with the Milwaukee Braves.  He later played for the Philadelphia Phillies and St. Louis Cardinals (playing in the 1964 World Series) before being traded to the Atlanta Braves.  Because his .200 batting average produced only 14 home runs and 74 runs-batted-in over his 11-year baseball career, he retired from baseball in 1967, which evolved into a blessing in disguise.

In 1971 he was hired by the Milwaukee Brewers to provide color commentary alongside announcers Merle Harmon and Tom Collins.  Uecker was the baseball expert; Harmon and Collins were play-by-play experts.  One day he was left to do the play-by-play coverage and his talent could not be denied.  From that modest beginning and until today, Bob Uecker has become the dynamic radio voice of the Brewers.  His accurate descriptions of games, his interesting side remarks about baseball history, his involvement as an active player, and his clever and interesting commentary has marked him as one of the great sports celebrities.  He has made a genuine art of announcing baseball games and subtly including humorous stories and advertisements for products he represents without missing a single play on the field.  Because of Bob’s abilities as an announcer, he has been honored by broadcasters throughout the United States and inducted into the Baseball Hall of Fame.

Uecker has a successful acting career.  He is an accomplished stand-up comedian and starred in several television shows including “Mr. Belvedere” and two movies, “Major League” and “Major League II”.  He has authored two books, “Catcher in the Wry” and “Catch 222.”

Bob Uecker’s voice as a radio announcer for baseball has been skillfully and professionally used with elegant expertise, humor and subtleness to advertize and promote meat on a daily basis (about 162, three-hour broadcasts annually) for nearly 40 years.   He is one of Wisconsin’s most famous and accomplished marketing voices for the Wisconsin meat industry.  He voluntarily and spontaneously talks about meat as a tasty, nutritious food that deserves the attention of consumers.  Occasionally Uecker will enthusiastically suggest to his radio listeners that they set up the grill for hamburgers at a tailgate party or serve delicious beef steaks, pork chops, fried  chicken or fish filets for a weekend party or a golf outing.  He subtly brings such subjects into his play-by-play description of a game that one may mistakenly think it is part of the script for paid advertizing.  Uecker knows how to infuse humor by telling stories that include meat. An example is one about all the great baseball players that have the first name ‘Frank’.  He lists many of the famous ‘Franks’ (such as Frankie Frisch, Frank Robinson, Frank Thomas).  He concludes by saying, “When I played for Philly, I roomed with Frank Furter.  The only problem about Frank was that he couldn’t play …….no arms or legs……ya get it, ha, frankfurter!”  In recent years, he has become a spokesperson for Usinger’s.  Fritz Usinger, Usinger president, exclaims that Bob Uecker is probably the most effective spokesman his company has ever had.

In this role as the Brewers radio voice, Bob Uecker continues as a unique, humorous, educational, interesting and positive influence in marketing the virtues of meat as one of Wisconsin’s finest foods.  Not only is he “Mr. Baseball” for the Milwaukee Brewers, he is also “Mr. Meat” for Wisconsin’s meat industry.