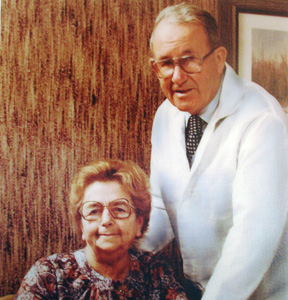 Mr. and Mrs. Bernegger were indeed pioneers in the Wisconsin meat industry. Fritz came to
America as a young man with adventure on his mind and the intent of returning to his native
Austria in two years. He worked his way through numerous jobs, and with Armellas help and
support, established a successful meat business which was eventually merged into a large
corporation. Armella was a true partner with Fritz in developing, leading and working in their
business, and the two of them are fittingly recognized together for their accomplishments.
In Austria Fritz had farm experience in the family operation and did a three-year apprenticeship
at age sixteen to become a professional butcher. When he came to America he existed by
working on a number of farms in the Canadian wheat fields. He worked for Cudahy Packing
Company in St. Paul, Minnesota, for the Layton Sausage Company in Milwaukee and for
Hopfenspergers in Appleton.

The success story really began to unfold when he moved to New London, Wisconsin during
September of 1928, where he got a job “to make good sausage”, which he did in earnest. He
struggled through a number of jobs and locations in a constant battle to keep a business going.
Eventually, three stores emerged and the business was known as the Quality Meat Markets.
A slaughterhouse was built in 1934, and a full service packing house was built on a one-acre site
in 1938. It was known as the Quality Packing House. In 1947, there were six people working in
the plant which consisted of a stockyard, kill floor and sausage kitchen. Everything was hand
work and the plant supplied all the fresh meat and sausages for the retail stores of the Berneggers
and their partner Billy Schmidt.

The partnership was dissolved in 1953 with Schmidt taking the retail stores and the Berneggers
taking the plant. The plant was organized as a corporation in 1954 and initially known as
Quality Packing House, Inc. Subsequently, the so-called Hillside Meat Products was renamed as
Hillshire Meat Products.

Growth and expansion took place rapidly. The plant came under Federal inspection in 1969.
Mr. Bernegger realized it was no longer a family business, and on December 13, 1971, they were
merged into Consolidated Foods. A few years later the name was changed to Hillshire Farm.
By 1977, nine hundred people were employed in the organization, and they were manufacturing
and distributing more than three million pounds of meat each week. In 1985, the name
Consolidated Foods was changed to Sara Lee Corporation, and in 1989, Hillshire Farm was
merged with Kahn’s as an operating unit of the Sara Lee Corporation. Fritz and Armella
Bernegger were especially proud of the Hillshire Farm’s Smoked Sausage, and they observed it
become the number one seller in the USA.

This is indeed a success story. A national level food organization was born, nurtured and
matured by a husband and wife team during their lifetime. Recognition is due not only to that
accomplishment, however, but also because the visible and financial status was only a secondary
consideration to the Berneggers, whose first devotion was to family, church and community.