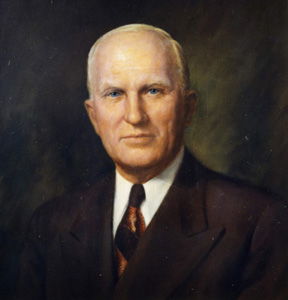 Professor Bohstedt was born June 22, 1887 in Gnissau, Holstein, Germany and died February 5,
1986 in Madison, Wisconsin. His wife, Ruth, died in 1991, and they are survived by two sons, Carl
and James. In 1902, Professor Bohstedt and his parents immigrated to the United States and in
1911, he enrolled in the College of Agriculture,University of Wisconsin. He obtained a Ph.D. in
1925.

In 1928, the University of Wisconsin invited him to join the Department of Animal and Dairy
Husbandry. From 1943, until his “official” retirement in 1957, he served as chair of the Department
of Animal Husbandry.

During his more than 60 years of active participation in Wisconsin animal agriculture, he was
involved with animal nutrition research and teaching, and is thought to have taught more students
in a single course of “Feeds and Feeding” than any other to date. He was especially productive in
pioneering the use of fibrous feed in livestock rations, for feeding urea as a protein substitute to
dairy cattle, and most notably for studying the mineral and vitamin requirements for swine.
Subsequently, he became recognized as the “father of trace mineralized salt.

He played a vital role in combining the production needs of livestock (primarily nutritional) to the end
product, meat, in a way that no other person was able to do before or during his time. He was, in
the truest sense, a scientist of the first order who paid attention to details as well as to the broad
picture of insuring that the major product of livestock production, meat, was monitored throughout
nutrition experiments.

It was through his wisdom and good judgment that the first abattoir for research purposes was built
on the University of Wisconsin campus in 1930. It was specifically used to transform animals
resulting from nutritional experiments into meat so that tissue could be obtained and analyzed and
the composition of carcasses could be carefully monitoredafter the completion of each experiment.
This effort was probably one of the first attempts by an animal scientist at the University of
Wisconsin to show concern for the improvement of meat as a food. It is likely that his initiative
encouraged others to study the carcass merit of livestock. Since then, the abattoir has twice been
doubled in size, in 1960, and again in 1970.

Bohstedt, as chair of the Department of Animal Husbandry and seeing the need for developing a
program in meat science, invited Robert W. Bray to join the Animal Husbandry staff to head up this
effort. Through Dr. Bohstedt’s efforts, strong support and encouragement, the meat science and
ultimately the muscle biology program took its roots at the University of Wisconsin. Bohstedt was the
major professor of Bray; during this relationship, Bray was encouraged and counseled to pursue
research studies that probed into the biological mysteries which would eventually help explain factors
associated with improving meat as a food. This has resulted in one of the most dynamic research and
teaching programs that currently exists internationally.

Bohstedt lived 98 very productive years, and his influence on the development of meat animal
agriculture in Wisconsin, the nation, and the world has been significant. He conceived and initiated the
meat science discipline at the University of Wisconsin.